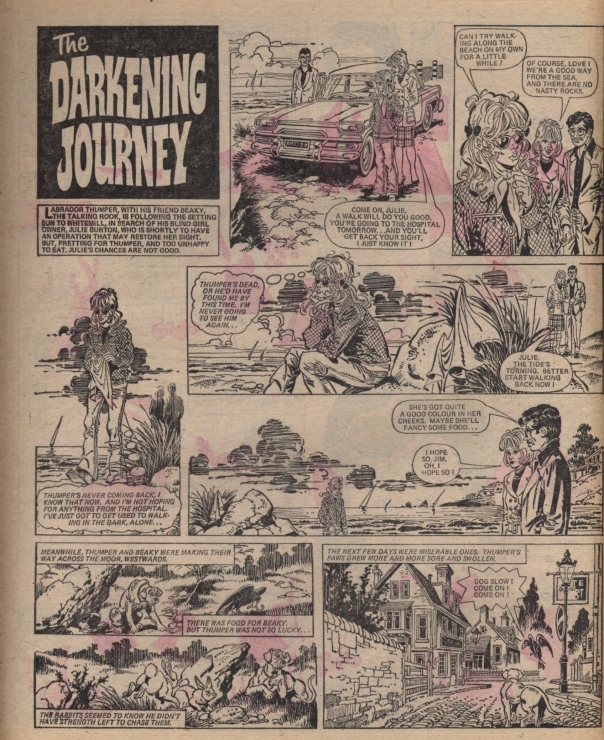 Reprint/translation: Translated into Dutch and published in Tina as “Samen door het duister” (1981)

Julie Burton’s eyesight is growing dimmer and dimmer, and her main support is her golden Labrador, Thumper, who almost acts as a guide dog. There are some bright spots in her future: her father has got a new job over in the west by the sea, and there is hope that an upcoming operation might give her good sight again. However, on the cusp of leaving to travel miles away to their new home, Julie and Thumper are separated and the dog suffers a blow to the head that leaves his own eyesight blurry. A friendly talking rook, Beaky, befriends Thumper and together they make their long difficult way west towards where Thumper remembers Julie’s new house to be located.

Their way is fraught with difficulties: it’s mostly humans who get in their way, either for positive or negative motives. First the talking rook is nearly recaptured by his former owners, only to be rescued by Thumper; then they both need to run away from a selfish rich lady who only wants to keep them while she’s able to show them both off to her snooty friends. (The rather more sympathetic chauffeur and secretary help them to escape in the end.) Sometimes Thumper and Beaky save the humans (foiling some lorry hijackers), sometimes they save each other (Beaky brings human help to save a trapped or injured Thumper more than once, though Thumper returns the favour when they are both trapped by floodwaters).

In the meantime, Julie is pining away thinking about Thumper, and he likewise seems to have an almost telepathic bond with her – her image is shown hovering over the setting sun more than once, as a beacon calling him to her, and she likewise often seems to be able to sense his misery. Increasing his woes, Thumper is suffering from more and more blind spells too. But there are many times when temporary blindness and separation anxiety are not the biggest evils they face – a few of the humans they meet have plans to put Thumper down; he is bullied by a pack of stronger dogs; and another time he is nearly eaten by rats.

Though by the end, Thumper in particular is moving more and more slowly, they eventually reach the westernmost limit of their travels: the final moorland, and the sea. The dramatic tension tightens right at the end as the dog, careless with happiness, hurts his foot badly and is trapped by the rising tide: but Beaky comes through again and brings Julie’s dad to the final rescue. All is well, once the two beloved friends each have operations to restore their eyesight.

It is an intrinsically pretty sentimental story, with the dog protagonist gifted with an implausibly good skill in navigating his way cross-country in the absence of a definite location to head for. (Not to mention the almost telepathic nature of the mental connection that he and Julie seem to share.) It must have been a popular story, at 20 episodes long and featuring on the cover twice, though at the same time not rivalling the most classic Jinty stories that were also running at this point. (Though they were shorter stories, both “Creepy Crawley” and “The Spell of the Spinning Wheel” featured on the cover four times in the same time period.) Journey stories in general seem to have been very popular at this time, and the addition of sympathetic animal characters will have given it a different angle from other journey stories.

José Casanovas is also always a talent to enjoy reading. His art style is much busier and ‘fuller’ than that of many other Jinty artists, who often like to include a lot more white space in their finished pages, but it makes a nice change of pace and feels very solid. This is a story that, while far from the first rank of stories running in this title at this time, is enjoyable on its own merits and will have a number of fans.

7 thoughts on “The Darkening Journey”