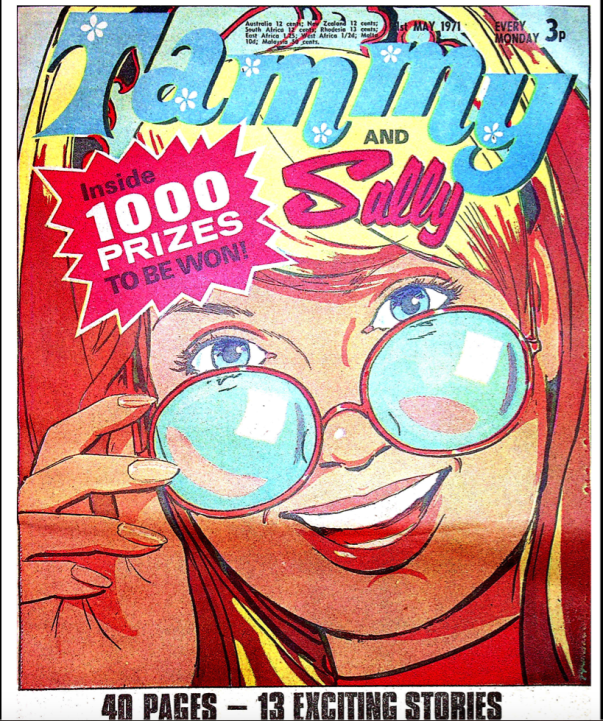 Hello, everyone. For something a bit different in the issue entries, we are going to have a round robin of Tammy, where one issue will be selected and profiled from each year Tammy was running.

Leading off in 1971 is the 1 May issue. We are now three months into Tammy’s run. How is it all going? Many of the stories from Tammy’s first issue are still going strong, though three look like they are near the end.

We are some weeks into the Sally merger and Sally’s contributions are still going too. The Cat Girl and Maisie’s Magic Eye are providing some light relief against the grimness of the Tammy stories that focus on cruelty and misery.

And what’s going on the stories?

Beattie wins a sports event despite dirty tricks from jealous rivals. But she is still on the run from the orphanage and her past is threatening to catch up, as she discovers when she is shown a newspaper.

Our Janie Little Mum has been saddled with an additional problem to looking after her younger siblings – helping to hide a carthorse that has been earmarked for the slaughterhouse! And on the top floor of the apartment block too!

“My Father – My Enemy!” looks like it is on its penultimate episode. Father has been critically injured from violence during the miners’ strike, and his ramblings inform Julie just why he is so horrible to them – he blames them for his wife’s death. And quite wrongly, of course. Julie is now anxious to reconcile with him, but he has one foot in the door of death.

Glen looks like he is on his penultimate episode too. After a long, epic journey, he finally tracks down his mistress June. But she has been cornered by a vicious dog, and it’s a killer!

The Castaways of Voodoo Island looks like it is approaching its conclusion too. Jackie is cornered by the dreaded Devil God, but the blurb for next week says we will learn the truth about him.

The Cat Girl discovers her father has been set up to look like an enemy spy. She’s got to get to him before the British agents do.

On Trebaran, Abel the evil sorcerer (come to think of it, he was the only evil sorcerer Tammy ever had) is after a stone in Trudy’s possession. Surprisingly, he disappears when Trudy’s friends appear, but when she wakes up the following morning, it’s her friends have disappeared. Where have they got to?

The Girls of Liberty Lodge and their headmistress Miss Valentine are in a barge race against the rival school, Hardington School, which is run along the harsh, sadistic lines of Miss Steele, who hates Miss Valentine’s guts . As usual, Hardington plays dirty tricks against Liberty, but it backfires with Liberty finding helpers who get them to the finishing line first. And they have a new pupil – Lady Angela.

Kate frees one of the slaves of War Orphan Farm with the help of “Mad” Emma. Kate declines the offer to come too, because she wants to stay on and free more slaves. But nasty Ned and the evil Ma Thatcher have spotted the escape. What can Kate do to stop them?

Molly is also helping to liberate mistreated orphans, this time at an orphanage. The cruel staff look like they’ve conned Binks the chauffeur into helping them, but when they attack Mistress Clare he lashes back at them, and they get arrested. Well, that’s the end of the cruel treatment at the orphanage.

Betina is suspended from ballet lessons after being wrongly accused. Her confidence is so shattered that she has decided to pack her bags.

Sara is one step closer to finding the ruby that will cement her claim to the throne of Hunzir, but is warned to beware “the fat bearded one”. By the looks of things, he is the one heading up the mountain in a jeep to cut her off.