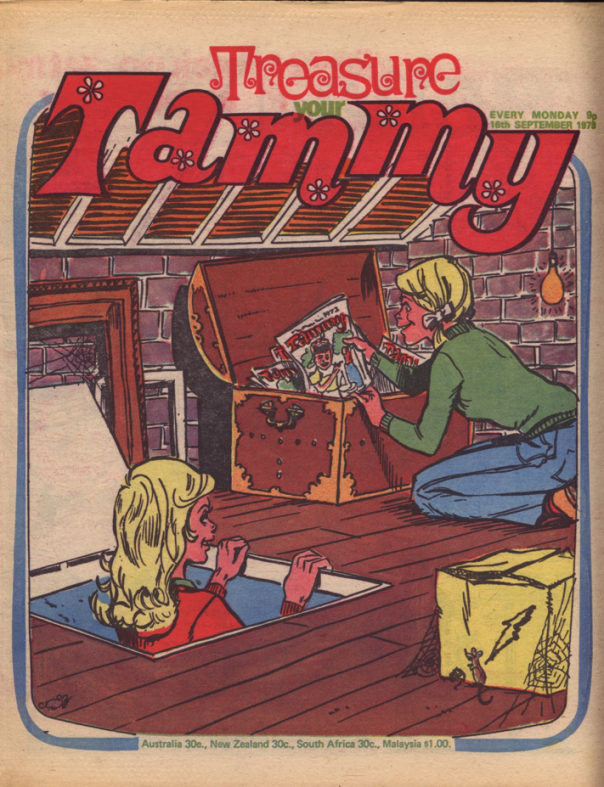 September 18, 1978 has been chosen for 1978 in the Tammy round robin. The cover has the Cover Girls doing what the letter column sometimes commented on what readers do with their old Tammys – build up a pile of them and put them in storage. One reader actually said she discovered someone else’s pile of old Tammys while helping her father do renovations. Even today there must be old piles waiting to be cleared out or rediscovered, and be put up on eBay for eager collectors.

Bella has to do well in a gymnastics competition in Sydney in order to keep her job as a gymnastics coach in Port Tago. Sometimes we wonder why she even bothered with that job, much less keep it, as it has been fraught with difficulties from the start that still resonate. Her employer, Mr Cox, made the job offer without thinking and realised he didn’t actually want it in the first place, but couldn’t back out. Mrs Cox tried to drive Bella off because she is a disgraced gymnast. Mrs Cox and Bella have made peace, but Mrs Cox is not the coach who can bring out the best in Bella because she is a real stick in the mud who does not realise how gymnastics have advanced since her day. So Bella is already handicapped before she even starts at the contest, and there would have to be ominous signs of trouble from an old rival as well.

“Maggie’s Menagerie” is a story about a girl (Maggie Crown) who is hiding secret pets. Her problem is not just that her gran does not like animals. It’s also because she has to hide her menagerie on gran’s barge! Maggie’s managed to get them all safely hidden on board. But how long can she keep them hidden from gran? It sounds like even she realises she can’t keep it up indefinitely.

Carrie Smith is despised as a crawler at school because of the tactics she uses, including sucking up to the new strict teacher, to keep out of detention. But the reason is she can’t afford detention – she has to run swimming lessons before and after school to keep her parents afloat while Dad is jobless. On top of that she has a sprained back but is not seeking treatment because she doesn’t want to worry her parents. Dad’s just sent off a job application and Carrie hopes to God he gets it so she can stop all this crawling.

Kate Winter is a tennis player who can’t keep a tennis partner because of her foul temper. She finally finds one in Pam Doggett, the granddaughter of the tennis club’s charlady. However, a row with her parents has Kate realise she is beginning to care for Pam. She chooses pairing with her in a tournament over a cruise, much to her snooty parents’ consternation. Dad brings Mum along to the tournament to show her what a “little grub” Pam is. But something else upsets Mum and she leaves in an awful hurry. Hmm, do we have a little mystery here?

Speaking of mystery, Molly has one in the “maid of mystery”, though this week the mystery unravels. A Mrs Bowden has framed Molly for ransacking because she has mistaken her for the new maid, Victoria. This week Victoria explains why: to get her inheritance she has to prove herself in “gainful employment”, and Mrs Bowden will get the inheritance if she fails. Lord Stanton has sent Molly away from the hall for her own protection, but not even that is stopping Mrs Bowden, who still thinks she is Victoria. At least the mistaken identity will keep the real Victoria safe, and Molly is far more capable of handling Mrs Bowden than Victoria is.

There is a definite mystery about “A Bus in the Family” as well, but nobody is investigating it. “Dodger” Wilkins, the man who sold Dad the bus he is using to take his daughter Rosie’s class on a school trip on the Continent, is so desperate to get it back that he is chasing them all the way across the Continent! Dad and Rosie didn’t know that before, but now they do because Dodger and his crony Harry seized and searched Dad. They also suspect those creeps of sabotaging the bus. Pity Rosie and her father weren’t there for the glorious scene where the crooks meet their match (below) in Rosie’s form teacher! Despite this, the chase is going on to Gibraltar next week, with nobody looking into why Dodger is going to such extremes. But from the sound of things, it’s because something is hidden on the bus – or maybe Dodger just thinks there is, as he didn’t find it.

Bessie is seeking homemade beauty treatments, but of course her food inclinations and tendency for naughtiness take over. She ends up with 1000 lines. Meanwhile, Sue is trying to find a way to stop her father’s home movie parties because the catering is too much work for her and her mother. She knows Dad’s mates don’t really enjoy his movies either; they’re mediocre at best. The solution: make her own movie of Dad’s outtakes when he is shooting his lousy movies and show it to his long-suffering audience!

This week’s Strange Stories, one of my particular favourites, is a moral about the dangers of TV addiction. Norma gets so engrossed in television she neglects her studies. Her parents’ efforts to sort her out meet with little success. Then Norma finds herself in the television drama she was watching and becomes the heroine who saves the day. In the process she scrapes her leg and a bandage is put on. Norma wakes up and thinks it must have been all a dream – but then she finds her bandaged leg. Dad is very surprised when Norma suddenly seems to be less keen on television and starting on homework.