We continue our exploration of older titles with a look at Princess Tina. Princess Tina started on 23 September 1967 by merging Princess (first series) and Tina. Well, it makes more sense than “Princess & Tina”. In 1973 Princess Tina merged into Pink (best remembered for Sugar Jones, the scheming celebrity you love to hate, though you have to love her for being a sex symbol).

Princess Tina is a larger size than her contemporary sisters. Princess Tina is also striking for giving credit to some of her writers and her creative teams. These tend to be the writers who write features such as Jeffy (Jennifer), who puts up cut-out dress patterns and text stories, and Horace, writer of the Horace Scope (horror scope). Now that is a nice touch, showing a human face to the creative team. There are even photos of these writers attached to the features. Horace also took part in the artwork; Stop ‘n’ Chat says he painted the cover you can cut out for the Princess Tina cookbook (which has been removed from this copy).

The Princess Tina covers were drawn by Purita Campos and featured happy girls doing very happy, everyday things; in this case they are eating watermelon. Many Princess Tina covers found their way into reprints on other covers, such as the Katy series and the Dutch Tina.

Princess Tina is best remembered for Patty’s World and The Happy Days. This particular issue is the last to feature Patty’s World in black-and-white. Next issue Patty is going to be produced in colour, “in all its shades from happy sunshine yellow to the blues”. Ooh, nice! In the story itself, Patty is looking forward to leading a majorette’s parade but has to cancel out because of a funeral. At least such a sombre thing should be out of the way in time for Patty to start enjoying her colour episodes.

In “The Happy Days” Sue has to find a missing will but the dog has torn it up. Let’s hope the dog hasn’t eaten it too! At least trying to find the dog helps a man in trouble.

In this issue, John Richardson makes one of four appearances as filler artist for “Clueless – the Blunderdog”. The other dates Richardson drew Clueless are 22 April, 29 April and 15 July 1972. The Richardson artwork for Clueless in this issue appears below.

“No Swimming Allowed!” is, as you might expect, an unreasonable ban on swimming. In this case it’s a headmistress imposing it on an entire school (because her fiancé drowned) instead of a parent or guardian imposing it on the protagonist. Of course the swimming continues in secret, with help from a surprising source: an aristocrat named Lady Squires. She and her husband have wangled it so the team will compete for the junior swimming trophy match, but the unpleasant head girl is suspicious.

Briony Andrews, a shy but good-natured girl who has elevated from “country mouse” to a confident model, finishes her story this week. But next week she starts another, “Designed for Danger”, so she must have been popular.

Jan Ross, a student nurse, is wrongly dismissed thanks to a forgetful nurse, Sister Mott. But now she finds Mott’s forgetfulness is having even more dangerous consequences: forgetting the warning that her car brakes are bust – and now she’s driving it!

“Problem Pony” is such a problem that Hazel Green has run away with him. His problem is that nobody can ride him unless his dog pal, Dodger, is near him. Then, when Dodger runs off, problem pony does the same. This will most certainly mean he will gallop into trouble.

“Freedom Island” is home to a school where children of UN delegates can be free. All the same, one girl, Pauline, is unhappy and sets off – in shark-invested waters. Even after being rescued from all those sharks, Pauline just won’t say why she tried to run off.

Jinny below Stairs is a good-natured maid who agrees to help a fellow maid, Mary, hide her brother Bert, who is on the run from the police. But doing so gets her into trouble and she is now in danger of being sacked. Then there is even worse danger – Bert is forced to come up to the house and it looks like the horrible housekeeper is about to catch them all red-handed.

In “Tina Aims for the Top!”, Tina has been ordered to find out why girls are leaving an office training course at Maire Castle. Tina suspects it is because the trainer, Fay Petrie, is up to tricks. Caught snooping in Fay’s office, Tina has no choice but to confront her with her suspicions. What is Fay going to say next week?

A while ago we had a request to put up some entries on older girls’ titles if possible. So here we will take a look at one: Pixie. Pixie ran 24th June 1972 to 13th January 1973 (30 issues) and merged into June.

This is #4 of Pixie. Like Penny, she is meant for a younger audience. This is evidenced right from the cover, which has a very young cover girl. And the content inside is clearly meant for a younger readership. But there is no denying Pixie is much more gorgeous than Penny. She has so many colour pages and the artwork is eye-catching, whether it is serious or humorous. Some examples are posted in this entry. The young girls must have simply loved it and bought the issues for this reason alone.

It would have made them enjoy the adaptations far more and want to read the originals. Pixie put a high emphasis on adaptations. The ones here are Enid Blyton and The Naughtiest Girl in the School, The Secret Garden, Milly-Molly-Mandy, and The Mikado. Elizabeth Allen, the Naughtiest Girl in the School, is a spoiled girl who is trying to get herself expelled from boarding school. But things get awkward when Elizabeth finds the school is beginning to grow on her. Sounds like Elizabeth set the template for serials on problem girls who like to get expelled, such as “Amanda Must Not Be Expelled” and “Queen Rider” (both from Tammy). 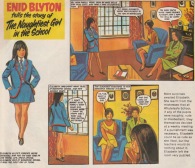 Other stories were inspired by popular literature or folk tales, such as “When Black Beauty Was Young” and “Marion of Sherwood”. The artwork is amusingly cartoony in places and would not be out of place in a Disney animated feature. 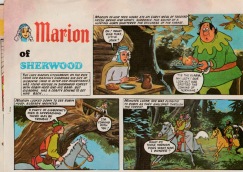 We also have The Happy Days, possibly a Princess Tina reprint (update: information received indicates it was unlikely). At the dreaded dentist Sue reads about a missing dog in a magazine and then finds the dog. But then she realises she forgot to note the owner’s address from the magazine and it’s been thrown out! While trying to find the owner she leaves the dog in the house, and the yappy thing scares the wits out of her mother. Oh, dear.

The text features should have amused the readers. One, “Those Sums”, is about a girl who struggles with maths (yep, many of us can relate to that). “A Story to Remember” would not be out of place in a book of fairy tales. A milkmaid is taking a jug of milk to market on her head, but gets caught in a dream about the riches it will make for her. It inflates her ego too much and she tosses her head, causing the milk to go for a burton. The moral it reminds her: don’t count your chickens before they’re hatched.

Pixie also had her share of cartoons. Mini Ha-Ha is one that enjoyed a good run in the June & Pixie merger until June merged with Tammy, but she might be considered a tad un-PC today.