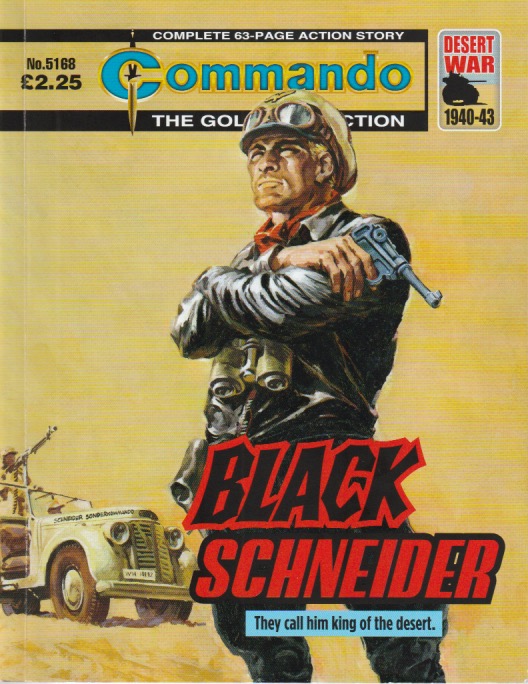 On the Jinty blog we love to collect information on writers and artists in comics, whether Jinty or otherwise. The reprint gives some titbits of information about Rafael Lopez Espi, the cover artist.

Espi began his career as a comic book artist in 1953. He worked extensively for war comics, beginning with drawing covers for war stories published by Simbolo, moved on to Commando, and even worked for Commando’s rival, Fleetway. His Commando covers included Black Schneider, Break Through!, Pirate Breed and Dangerous Dawn. As well as war comics, Espi worked on Western and romance comics.

More information on Espi can be found at https://www.lambiek.net/artists/l/lopez-espi_rafael.htm and https://www.comicartfans.com/comic-artists/lopez_espi.asp

In 1938, traveller and explorer Stanilaus Schneider is dispatched to a German archaeological dig in Libya to help search for prehistoric cliff paintings. After the paintings are found he disappears for a month in the desert on a secret military mission for the Nazis, and tells the archaeological professor to cover for him.

During World War II Schneider re-emerges in the desert as Army Major Sonderkommando (Sand Commander), and self-styled King of the Desert, which he boasts is his friend, and he gives the impression he is in confident, total command of it. He dresses himself up in black leather (despite the desert heat), which gives him a sinister Gestapo-like appearance, hence his nickname of Black Schneider. He has developed a military style that enables him to somehow sneak up on Allied platoons and take them down from the rear and completely unawares. There is a real mystery as to how he is able to emerge out of nowhere from the desert sands and catch them napping from behind, and he’s giving the impression he must be a magician or something.

Schneider pulls this stunt several times on Sergeant Bill Kane and his 3rd platoon of the 2nd North Loamshires, which always causes them to fail in their mission and take heavy casualties and loss of equipment. As a result, the platoon develops a reputation as a bad luck platoon that is jinxed, and the jinx is dubbed “the Mark of Kane”. Nobody wants to join that platoon, and one soldier dubs Kane “Mr Suicide”. Lieutenant Colonel Stacey at Battalion HQ won’t listen to Kane’s protests that Schneider and his desert tactics are responsible for their failures. Nor does he listen to Kane’s suspicions that Schneider is making clever use of little-known desert paths, a discovery he made when investigating how Schneider and his platoon managed to escape from one of their attacks so readily. When it reaches the point where Kane loses his entire platoon through Schneider’s tactics and Stacey won’t listen to the reason why, he is transferred to a store job at base camp.

En route to base camp, a mine field gives Kane an idea on how to get back at Schneider. He extracts two mines and uses them to mine the pathway he discovered before and blow up Schneider next time he uses it.

Then a desert Arab appears out of nowhere and starts to use the path, and Kane has to warn him about the mines. But when Schneider and his army show up, they are well prepared to deal with the mines, and Kane realises the Arab must have been an informer. Schneider confirms this as he takes Kane prisoner.

En route to and during his time in Schneider’s POW camp at the Oasis of Sitra Kane discovers how Schneider does it. He used that month in 1938 to trace a desert road constructed in ancient times and mapped it with compass bearings. The road is concealed by desert sand, so he cunningly uses his map to navigate it without sinking into the sands as so many convoys have done. He is also keeping Arab guides well paid with old Spanish gold (treasure to them) to guide him along the caravan routes and ancient wells, which enables them to keep themselves supplied with water as well. And the secret to his success is that very few outsiders know about the ancient road, which is also concealed by desert sand, the caravan routes or the Oasis of Sitra, so the Allied Intelligence knows nothing about it. This is how he is able “to hold a gun in the back of the British all the time. They never expect the enemy to come from the sea of sand”.

Schneider’s POW camp at Sitra has the deadly desert itself acting as the bars and barbed wire. So there is no need for them, only plenty of guards. The prisoners are forced to fill up cans with either water or petrol, and keep the water and petrol cans apart, don’t mix them up (hmm, do we sense something crafty could be pulled here?). Most of the prisoners are resigned to staying until the war ends because the camp is surrounded by desert that only Schneider seems able to cross, and the British know nothing about the camp’s existence. But not Kane once he has the full picture of how Schneider is doing it – with the ancient concealed road he plotted and the Arab guides. He is going to orchestrate a mass breakout by beating Schneider at his own game.

The Battle of El Alamein is now on and Schneider wants to be part of the action. He departs, leaving the prisoners only lightly guarded. He does not realise his water tanks are really filled with petrol and the prisoners have taken water tanks for themselves (yes, we thought something like that was coming). The soldiers quickly overcome the few remaining guards and seize vehicles, ammunition and weapons. Kane also seizes the Arab who betrayed him and forces him at gunpoint to take them along the caravan route. Before departing, he paints the captured vehicles with “3 Platoon” and tells his fellow escapees this is what they are now. He is forming a new 3rd platoon with his escapees, to salvage the reputation of the old one and settle old scores with Schneider.

Kane directs the Arab to take them to the wells Schneider showed him at Bir Quara, figuring that Schneider must be stopping there for water and discovering the trick with the cans. Upon arrival they surround Schneider, but he is not one to surrender, so “the Skirmish at Bir Quara” begins. Soon Schneider is the last man standing. Kane takes him prisoner to El Alamein and seizes his map of the concealed desert road.

Stacey is very surprised to see this new 3rd platoon arriving at the Battle of El Alamein, with Kane himself in command. He will soon learn that the new 3rd platoon is much luckier than its predecessor, much of which is due to consisting of toughened desert fighters who have ironically learned to navigate the desert through their enemy Schneider.

The first thing you see with this issue is that it is the villain on the cover, and his presence monopolises it entirely. None of the heroes appear anywhere. His resplendent, strident, confident appearance hits you right in the eye and makes it an eye-catching cover. It’s an unusual step for Commando to take, having the villain star on the cover rather than the hero, but it’s a very sensible one, and makes a far more striking cover, rendered brilliantly by Espi.

Schneider’s nickname is also the title of the story. It has you thinking that maybe the whole story is going to be about him. Maybe he will be the anti-hero or even hero of the story, which Commando has done before with non-Gestapo German soldiers.

But once you open the issue (or read the blurb on the back) you know that’s not the case. Black Schneider is set up to be the bane of Bill Kane and his 3rd platoon.

Schneider and his desert tactics are clearly based on General Rommel, “The Desert Fox”. There is also a dash of the Red Baron in the way he unconventionally dresses in black leathers rather than army uniform. There is a hint of the Gestapo as well, both in his dress and in his icy demeanour. He is an extremely clever villain, styling himself as master of the desert and giving the impression his control of the desert is seeming miraculous and strikes awe and confusion into the enemy. As well as his seeming uncanny ability to sneak up on the enemy from behind out of nowhere, he further dumbfounds them with tactics such as destroying their supply of water, the most precious commodity of the desert, saying he has no need for it himself. Why the hell should he not need water when he’s out in the desert? His bragging that the desert is his friend appears to be no idle boasting and he almost appears to be a magician.

But once Schneider’s secret is uncovered, Kane discovers there was nothing miraculous about it – just learn how others before you have tamed the desert – and it was all a simple yet ingenious trick. And it’s a trick that his enemies take over themselves and start to use against him.

Schneider’s seeming magic is further enhanced by the fact that he is always bumping into the same platoon and pulling the same trick over and over on them, and giving them a bad luck reputation. If Schneider had done it on several platoons, British HQ would have had to take these reports about Schneider more seriously. But as only one platoon seemed to get picked on it is poor old Sergeant Bill Kane who gets the blame and has to clear his name and reputation of his platoon.

Kane is reduced to the point where he has to take on Schneider and clear his reputation single-handed. It is ironic that it happens through being taken prisoner by Schneider, but Kane soon finds out that this is the only way he could learn Schneider’s secrets and start to use them himself. So we get some elements of the slave story of the protagonist being the only one who refuses to be broken by his captivity, which the other prisoners are resigned to, and find a way to escape. He not only does so but also gets his fellow prisoners back into action. And as this is the Battle of El Alamein, it would have been a stunning victory for them all and restore the name of the 3rd Platoon, and Black Schneider finally met his match in Sergeant Bill Kane.