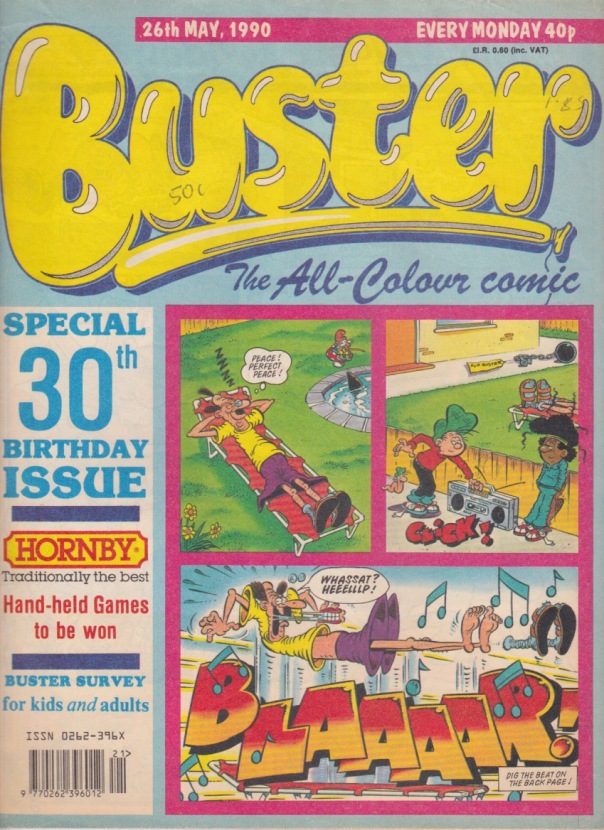 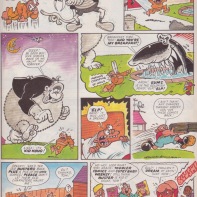 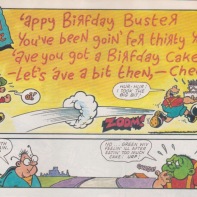 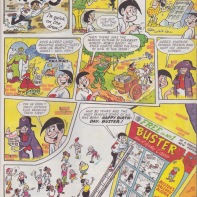 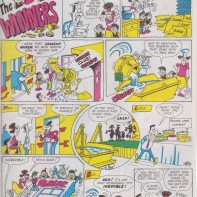 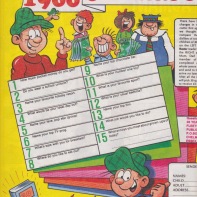 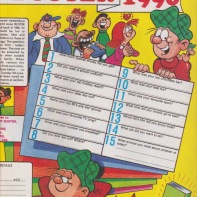 Contents in this issue:

Sunday 28 May 2017 marks what would have been Buster’s 57th birthday. To honour the anniversary I am discussing how Buster celebrated his 30th birthday in 1990, as it is a Buster birthday issue I have to hand. I have also included a gallery of the pages that marked the occasion. Sadly, Buster was cancelled just a few months short of his 40th birthday and never got the chance to celebrate his ruby anniversary.

Specky Hector kicks off the celebrations by pulling out his vintage Busters for fans to read. Tom Thug steals the comics (and later the birthday cake), but it all explodes in his face, as usual. Buster also steals the opportunity for a blast from the past by slipping some old Buster characters into Tom’s pages, which gives Tom nightmares. Later on in the comic, Specky Hector presents a one-page history of Buster, with Tom providing some humorous asides.

“The Winners”, “Chalky” and “Double Trouble” also join in the celebrations. The Winners compete in the Editor’s contest for the best Buster birthday cake. The Winners make a birthday cake that is so huge they need a cement mixer to make it. Too bad the cake ends up like cement as well and just about breaks the poor old Editor’s teeth! Still, the Editor awards them the first prize anyway – a cookbook – as he believes they really need it. The Winners say they will use the next 30 years to practise, so we expect a perfect birthday cake from them when it’s time for Buster’s 60th birthday. The twins in “Double Trouble” present the Editor with a huge present, which is full of the Buster characters they have rounded up to join the party, and the characters have all brought the food for it. Chalky decorates a wall with a wall-sized version of Buster’s first issue to commemorate Buster’s 30th birthday. According to bustercomic.co.uk, the page was re-used for Buster’s 35th birthday in 1995 and 39th birthday issue in 1999.

Lastly, Buster has recycled a parents & kids survey from 1985 and updated it in order to compare the generation of 1960 with the generation of 1990. The kids of 1990 would answer the questions on the first page, and an adult from the family would answer the questions on the second page. The purpose was to compare the lifestyles, likes and dislikes of the children of 1990 and the children-now adults of 1960. Of course there were prizes to be won. It is funny to think that the children of 1990 who responded back then would now be old enough to respond as the adults of 2017. How would their likes, dislikes and lifestyles of 1990 compare with those of the kids of 2017? Does anyone fancy trying out the survey out with their kids? It’s been uploaded in case anyone does.

“The Leopard from Lime St” is also a reflection of how times and readership had changed. When the strip ended in 1985 it marked the end of an era for Buster, namely the adventure strips that used to abound in the comic, such as “Fishboy” and “Galaxus”. From then on it was funnies all the way. The year 1990 was the year Leopardman enjoyed a brief revival, with a collection of reprints from his old strip. But Leopardman did not seem to be as popular as he was before. His 1990 revival came to a definitive end, with a reprint of the story that ended with him losing his mask while pulling a rescue, so he had to fake his death to protect his secret identity. Thus he did not make it to the merger with Whizzer & Chips the following week. Despite a closing line that said “The Leopardman lives on – to return again sometime!”, he did not come back during the last nine years of Buster’s run. However, the assurance that the Leopardman would “return again sometime” is going to be fulfilled after all, with the upcoming Leopardman reprint volumes.

A discussion of Buster’s last nine years and his final issue can be found here.