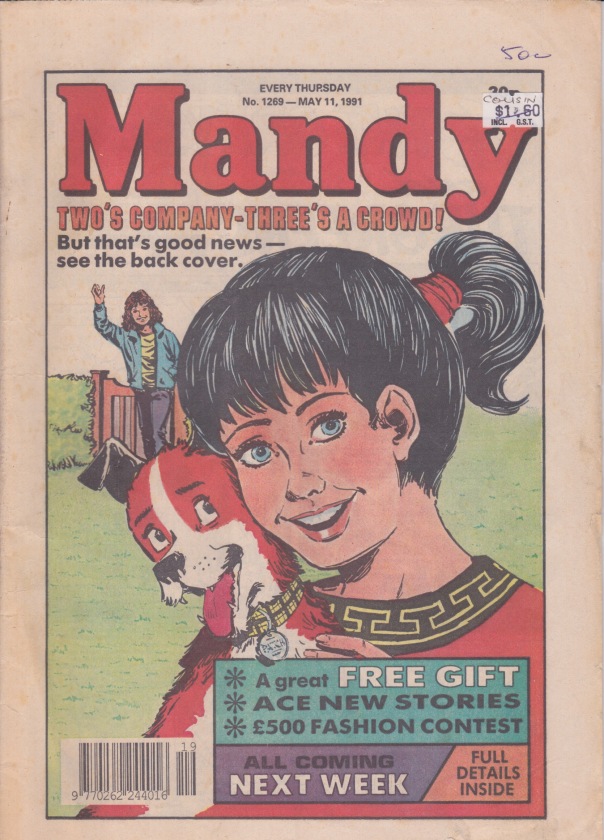 This was the last-ever issue of Mandy. After a long run that began on 21 January 1967, Mandy and her sister comic Judy both ended so they would amalgamate into a whole new comic, Mandy & Judy (later M&J), instead of one incorporating and absorbing the other, as was so often the case with mergers.

Mandy’s cover story of the week was usually a series of misadventures that played on a single word or phrase, such as knots, stars, melting, music, ups and downs, and guesswork. This sometimes had a happy ending, sometimes not. But in this case it is meeting up with Judy, the cover girl from the comic she will amalgamate with next week. Judy moves in next door to Mandy, and the two girls come together when Mandy’s dog Patch goes missing and it’s Judy who finds him. This is the last time Claude Berridge drew the Mandy cover stories as he had done for years, and the last time Norman Lee drew Judy’s cover story. Next week Guy Peeters takes over for both Mandy and Judy in their new two-in-one comic.

As this is Mandy’s final issue, her stories come to an end. The only exception is “Glenda the Guide”, which carried on in Mandy & Judy but didn’t last long. This was a humour strip about a blundering girl guide who is always trying to win badges, but her efforts always lead to failure and loads of laughs for the readers.

In the other stories, Lindy Grey is always getting into trouble by copying her favourite soap, “Life with the Greens”. Now it’s her birthday, she decides not to copy it to be sure of a happy birthday. Ironically, Lindy’s birthday copies the soap all by itself and nothing goes wrong! Then the soap finishes, but Lindy is eager to watch and copy its replacement because the star is also called Lindy.

The two girls in “Best Friends!” are anything but. They hate each other but keep being shoved together because their mothers are friends. Then an emergency brings the two girls together when their mothers come down with food poisoning, and they are surprised to learn that their mothers started off as enemies too.

Pippa Roberts has all sorts of adventures on her paper round. This time it’s helping an old man who refuses to go into a home. Pippa’s solution is for a neighbour to help him with housework in exchange for him helping her with her garden. Brilliant!

“Freda Who?” is one of two Mandy reprints. Karen Wilkinson is puzzled by new girl Freda, who seems to be oddly clueless about things. Now it is revealed that Freda comes from the 23rd century, where warfare has rendered England virtually uninhabitable. Freda’s father sent her on a one-way time travel into the 20th century to save her life. This reveal must have had readers in tears.

Gwen is taking five goats across the country to Melbury Market as a publicity stunt for her mother’s health food shop. In the final episode she finally gets to Melbury and gets all the publicity she could want, plus a welcome lift to get her goats home.

Susan Smith has been faking deafness to continue getting favoured treatment after the genuine deafness from an illness wore off. But of course it all has to unravel in the end, which is what the whole of the final episode is all about. A new girl, Sonia, who had the same illness, has gotten suspicious of Susan. After several attempts, Sonia eventually succeeds in exposing Susan’s deceit to the other girls. Susan puts on the bravado, saying what fools she’s made of them, it’s been great fun, and she’s come out the winner. But she soon finds out she is no winner because nobody ever trusts her again.

It is fitting that the last-ever Mandy ends on the final episode of the most popular serial she ever ran: “Angel”. A wealthy Victorian woman, Angela Hamilton, is diagnosed with an incurable illness. She goes into the London slums to dedicate her remaining time to caring for the needy as “Miss Angel”. This was Angel’s second reprint in the regular Mandy comic, and the reprint in Lucky Charm makes it three. Angel was not reprinted in the Mandy & Judy merger (probably too close to the last reprint in Mandy). But as the lineup for Mandy & Judy explains, she did carry on in the amalgamation with “The Diary of Angel”. 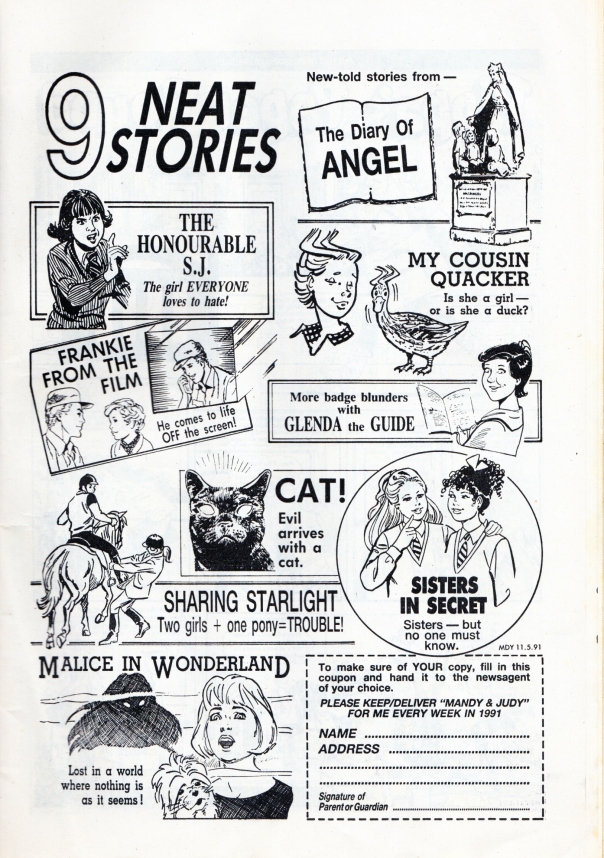