This issue sees episode 2 of Jinty‘s last Christmas story, “Her Guardian Angel”: as Mistyfan pointed out in the post about the previous issue, by the following Christmas this title had merged with Tammy. And Pam is still struggling hard to make a cheerful Christmas party for the local orphans, despite many arguments between her friends and her supporters. But by the end of this week’s three pager, it looks very much like it may all be off…

“Girl The World Forgot” comes to a dramatic end this week as some reenactors dressed as Vikings from the mainland come to the island. They rescue Shona and explain to her local ghost Alice Drunnon has been haunting the castaway girl. Shona is reunited with her parents – on Christmas eve, of all days. What an emotional present for all concerned!

“Sue’s Daily Dozen” sounds like it is nearing its end – we even see an appearance by Granny Hayden, as a vision helping Sue to defeat some crooks. Just about the last thing for her to do seems to be to help George the blacksmith have a truly blessed wedding – blessed by the spirit of Granny H herself, mind you!

Nadine is still combining disco dancing with netball, much to the displeasure of stiff-necked captain Betty. This time the other netball players need to rescue Nadine on the dance floor, by getting a huge strobe lightbulb from one end of the crowded dance floor to the other – in record time – using their netball skills, natch. 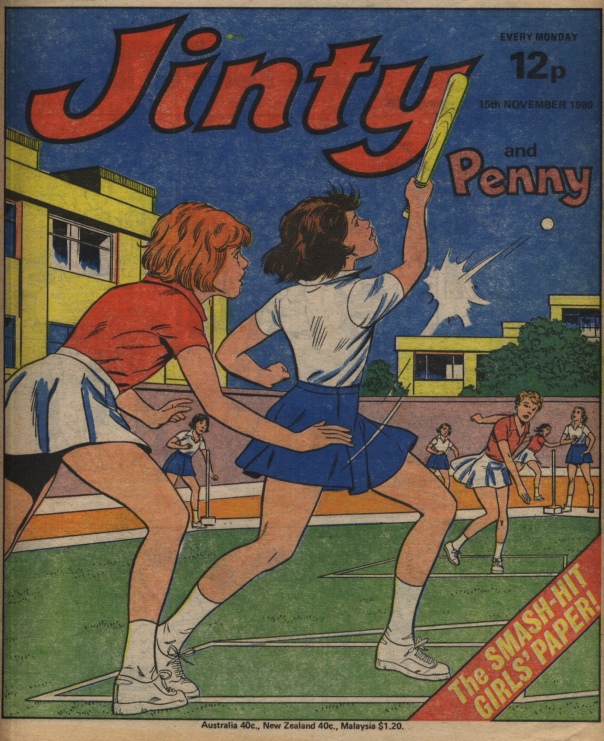 Heading back slightly in time from the issues most recently posted about by Mistyfan, here is another Mario Capaldi cover but this time one in the sports series. The scene has a very modern feel, with the blocky school buildings in the background. I’m not entirely sure about all the colour choices though – those white socks and shoes look like they’ve been forgotten about rather than deliberately chosen. Mind you, in those days we did have to carefully paint tennis shoes as white as white could be, so it’s probably my memory that is at fault…

“Mimi Seeks a Mistress” is nearly the last of the stories to be linked to on the story list: it is a complete story in this issue, and only two pages long. I wonder if it might have been commissioned for something else, like an annual or a summer special? It has little in it that makes it fit Jinty‘s “feel” more than any other story paper, so it could easily have been commissioned for some other use. At this point Jinty is not yet obviously struggling to fill its pages, as it was shortly to do with multiple reprinted stories in the same issue. As it is only two pages long, I think it would be nice to reprint “Mimi” for your enjoyment, slight though it is.

From June 1980, Jinty had started to run specially-drawn covers by Mario Capaldi, rather than using images from inside the comic. They were striking and beautiful, though I confess to a preference for the ones that gave you more of an idea of the contents of each issue.

“Blind Faith” is particularly worth noticing in this issue; despite being beautifully drawn by Phil Townsend, I mark it down as one of the more ridiculous stories ever run in Jinty becaase, not content with blind ballerinas and stuttering or dumb heroines, here is the reductio ad absurdum of the genre with, yes, a blind showjumping horse. (Mind you, I did comment on this story to Barrie Mitchell at Raptus in 2003, he told me that there had been a real news item he’d seen once, about an actual blind showjumping horse! As they say on Wikipedia, ‘citation needed’, but I’m sure truth can be stranger than fiction…)

The Gypsy Rose story this issue is possibly a reprint; the artist is the same as drew “Wild Horse Summer” in the early days of Jinty. It has the feel of something possibly taken from a more old-fashioned, ‘classic’ girls comic.

I bring you the cover of Jinty 1 March 1980 because it is one of my favourite Jinty covers. Gothic horror, in the form of the bat, vampire and skeleton (from The Ghost House in the circus story), was something seldom seen on a Jinty cover. But it does appear here, which makes it all the more striking.

The Gypsy Rose story featured on the cover is, I suspect, a reprint of a Strange Story because of the paste-ups of Gypsy Rose at the opening and close of the story. A circus is plagued by a series of strange events – the work of a joker, or a the ghost of Marvello, who had sworn revenge on them if they ever returned to the place where he had been killed? In the end, the hitherto sceptical circus owner does not know what to think, but gives the order to move on anyway.

In “Pam of Pond Hill”, Marty Michaels finally receives treatment for hurting her back and not telling anyone about it because she had sustained the injury while using the school trampoline without permission. But she unwittingly causes further trouble by deflecting the blame onto her sister Trina, which causes her to run off.  A stern lesson about honesty in facing the consequences for your mistakes. This is the final episode of the current Pam story, and a new one will begin next week. We are warned that it will feature mutiny because of school dinners.

“The Perfect Princess”, a story often regarded as one of Jinty‘s worst, concludes in this issue. We are promised that two new stories will begin next week. They are “Tearaway Trisha” and “The Venetian Looking Glass”. Incidentally, the latter is drawn by Phil Gascoine, who is still drawing “When Statues Walk” for Jinty. So Gascoine is drawing two stories simultaneously in Jinty – again. However, “When Statues Walk” has climaxed, with the evil Hel escaping her prison by switching bodies with Laura Ashbourne. So Gascoine does not have much further to go with it.

Meanwhile, Toni’s trials intensify in “Toni on Trial”, the relationship between Bridie and her mother takes a downturn in “White Water”, and the mystery of the “Spirit of the Lake” deepens as Karen ponders on who her mysterious coach is.

And what’s the exciting news the cover was talking about? In addition to two new stories, the next issue will feature “Wildflower Wonderland”, the start of a pullout on wildflowers. What they are, where to find them, their folklore, pressing them, poutpourri – and more!

On 27 September 1980, Jinty & Penny ran what is perhaps the most innovative poll in girls’ comics history – Pam’s Poll. This poll took the form of Pam’s school project. Pam’s questions were designed to gauge and adjust the balance of stories, the biggest favourites from the past, and what stories would make popular reprints.

The poll resulted in the reprints of Land of No Tears and Angela’s Angels (the latter because readers wanted a nursing story) in 1981. Pam’s Poll must also have been instrumental in the repeat of The Human Zoo during the Tammy & Jinty merger. The letters page revealed that many respondents had wanted Stefa’s Heart of Stone (1976) to return as well. Eventually Stefa was reprinted, but in Princess (series 2) and concluded in the Tammy & Princess merger. It is also possible that Pam’s Poll prompted the reprint of The Forbidden Garden in Tammy in 1984, a reprint that was sadly cut off by Tammy’s cancellation.

The stories Pam profiles in her project are: 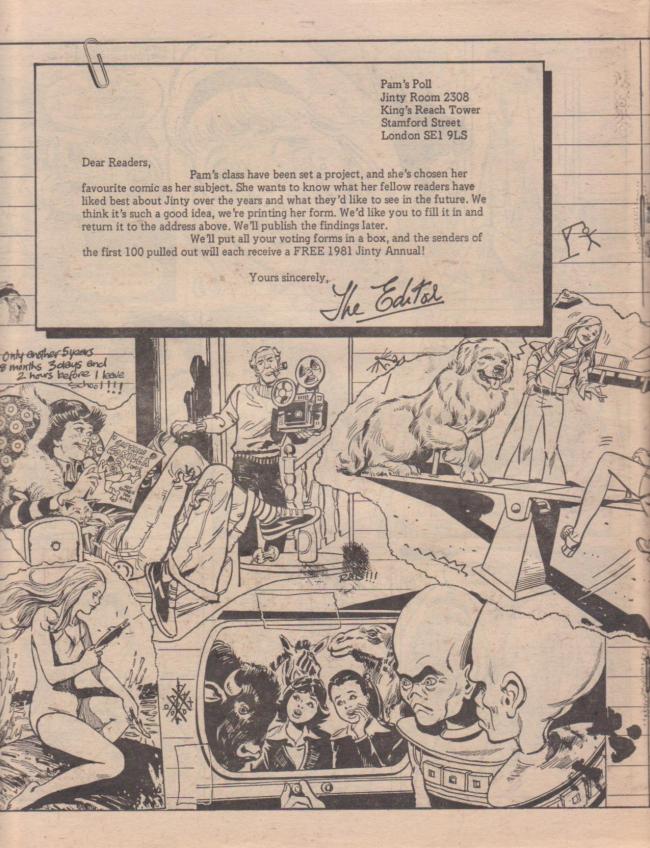 And here is the cover from the Pam’s Poll issue:

Beginning with this issue, Jinty, or rather, Jinty & Penny, switched to sports covers drawn by Mario Capaldi. Later, Jinty would run features on sporting tips, probably in line with the covers. The sports covers must have brought more emphasis to the sports stories that Jinty was known for, but it may have been unfair to her other types of stories, particularly the science fiction stories she was also known for. The change in cover may also reflect the change in editorship that occurred around this time.