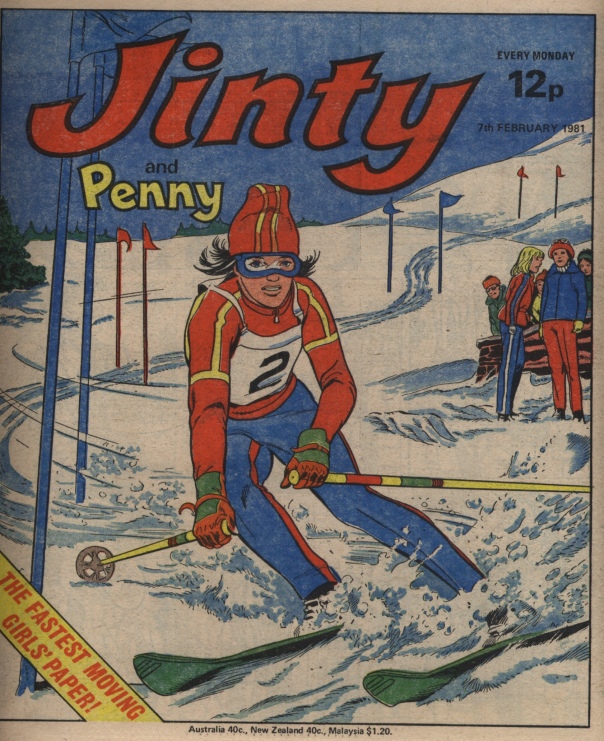 “Pam of Pond Hill” is fun this issue, with Pam and her mates writing a controversial ‘underground news-sheet’, with an anti-school uniform slant. I wonder if any readers were inspired to do their own ‘zine or news sheet, having read this?

In “The Ghost Dancer”, Ferne is finding her deception to be a self-made prison; she doesn’t know how to undo it and tell the truth. This is a typical stage in such a story, but the way it is done here seems to strike home a little harder than usual. “No Medals for Marie” is a slightly different deception story and likewise has its usual stages to get through; here the challenge that unkind godmother Miss Simon has given Marie, of forbidding her to win any medals, is once again jeopardised by a coincidence that makes it look as if she is winning some despite trying very hard not to. This is a rather lukewarm story, but the Phil Gascoine art is still lovely.

My favourite story from this era is  “Life’s a Ball for Nadine”, a tale of chums, netball, and disco dancing. Nadine’s mum is bored at home because her dad has to work late, so the girls invite her out with them, first to a netball match and then to “a good disco”. Seemingly her nameless mum is enthused by the exciting night out, in which a netball goalie hurt herself and a disco-dancing chappie danced himself right off the floor; but luckily for Nadine who is gearing herself up for major mum-embarrassment, the mum is all enthused about… joining the St John’s Ambulance brigade! Again the beautiful art, by Mario Capaldi, is a real attraction, but also there is a sense of fun and vigour about this story that I think still serves it quite well.

On 21 November 1981 the final Jinty was published.

Inside: Exciting News For All Girls Who LIke A Good Read!

The last seven issues could be considered a countdown to the merger, with a reprint of the seven-part series on Monday’s Child is Fair of Face, Tuesday’s Child is Full of Grace etc, short filler stories and Gaye’s attempts to farewell Sir Roger end in disappointment because he failed to pass the test to the House of Ghosts. She does not realise he deliberately failed his test because he thought she would miss him too much. But in the last issue, Gaye finds out what Sir Roger did and, when she wangles him another another tryout, she makes sure he passes. Only one long serial, The Bow Street Runner, began, and would conclude in the Tammy & Jinty merger.

Two stories, Worlds Apart and (probably) Dracula’s Daughter, suffered rushed endings, evidently to clear the decks for the seven-issue countdown. Worlds Apart was the greater casualty of this; the final of the six dream worlds it explored was clearly cut too short. That world was only allowed one and a half episodes while the others had four or five. The result was an unsatisfactory exploration of the final world in the name of a rushed conclusion. Dracula’s Daughter gives the impression it may have been cut a bit short as well, but fortunately not so drastically that you would notice too much.

We also have two bookends in this issue. The first is Phil Gascoine, the only artist whose work lasted from the first issue (Gail’s Indian Necklace) to the final one (Badgered Belinda). The second is Tansy of Jubilee Street, who reminisces on her very first story in the very first issue of Penny (which merged with Jinty),  where she loses her diary and gets into all sorts of scrapes trying to find it. In the final Jinty, Tansy finds her diary has disappeared again. We get flashbacks of what happened the first time, and watch Tansy as she gets into new scrapes in her search for it, and horrible thoughts of what people will find out if they should read it. Much to her relief, Tansy finds her mother just put the diary away for safekeeping. 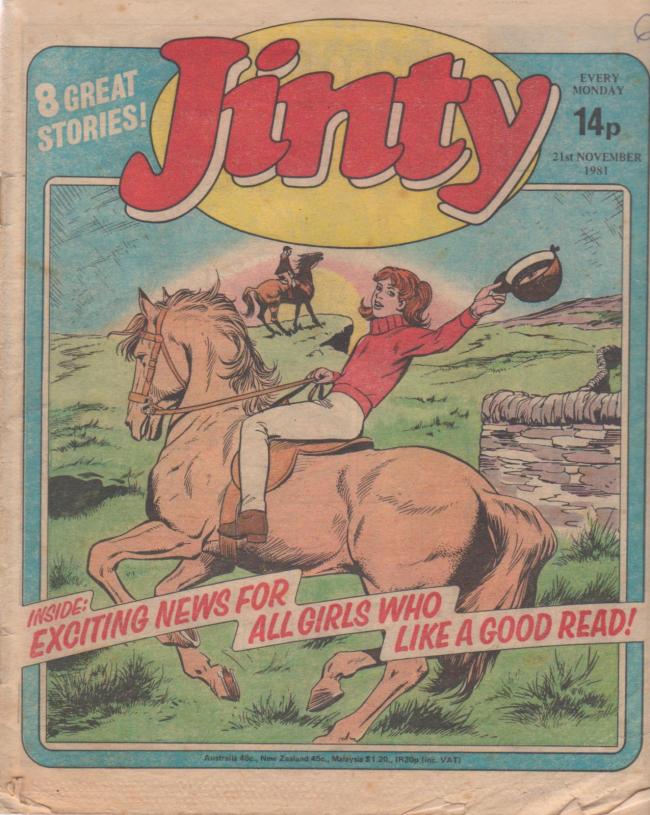 [Edited by Comixminx: I thought readers might also be interested to see the double-page advert that ran in this final issue for the merged title.] 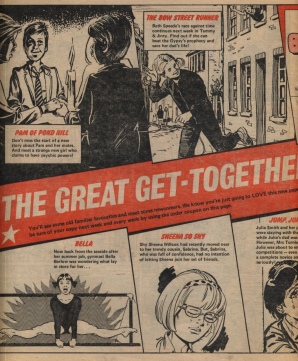 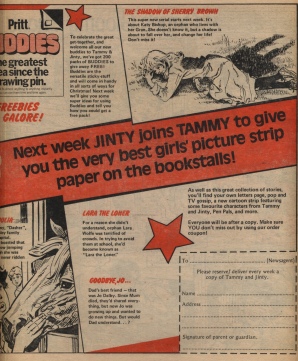 Starting with this issue, the covers switched from sports covers to featuring the cover story. These were a cover size version of the spot illustrations for the text stories starting inside. The covers were still drawn by Mario Capaldi.