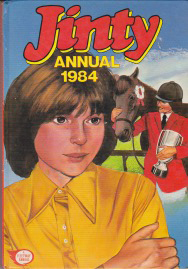 Jinty annual 1984 was the last Jinty annual to have any recognisable Jinty material. The next two would be a collection of reprints that were taken from older annuals and were Jinty in name only. Stories that are recognisably Jinty are Alley Cat, Snoopa, and reprints of The Four-Footed Friends and Forget-Me-Not at Christmas. But there is no trace anywhere of Gypsy Rose or Pam of Pond Hill. What appear to be new material are “The Talking Cat”, “Princess Punkerella” and the text stories. And the annual is heavy on features, such as recipes, art & craft, quizzes, general knowledge and games.

We get some Misty in this annual. “The House Across the Way” is a surprise in that it is a reprint from Misty #16. “Princess Punkerella” could be straight out of Misty too, as it is drawn by Honiera Romeu, who was a regular Misty artist. The story is worthy of Misty too, as it concerns a punk girl, Ella Jones, who tries to extort money out of an old lady. The old lady says that her purse has nothing but three wishes. Ella uses the first two wishes to satisfy her greed, but as you might expect, it backfires and Ella’s third wish is to wish she had never met the old woman. Yet this story never appeared in Misty. Neither did “The Talking Cat”, which could be straight out of Misty as well. Shona finds her beloved cat Clovis, who has been taken ill, can suddenly talk. The reason is that he is possessed by an alien, and it’s not long before all the cats in the neighbourhood are talking too! It all turns out to be a dream, but of course Clovis recovers.

While this can be described as the last substantial Jinty annual, it is a bit disappointing that it does not use more Jinty material, even just more reprints. Some of the shorter Jinty stories, such as Tale of the Panto Cat, could have been recycled, and likewise with Gypsy Rose tales. Why did Jinty not use more of her own material – legal reasons, maybe? Or economics? Still, this annual would still satisfy any reader who wants a good read from cover to cover.