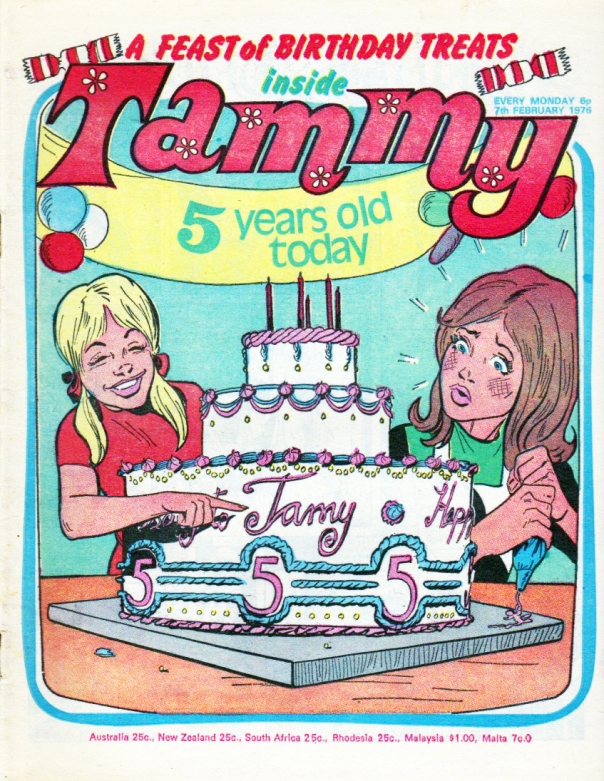 It is now 46 years since Tammy was first launched, on 6 February 1971. The first Tammy and Tammy’s 10th birthday issue have already been covered on this blog, so we will commemorate the anniversary with Tammy’s 5th birthday issue.

The Cover Girls are the first to honour the occasion, in their usual humorous style. Let’s hope they managed to sort out that little glitch with the birthday cake. Or maybe the Tammy team saw the funny side, just as the readers did.

As soon as we open the cover we see the first of Tammy’s “birthday gifts” to us, which is the first episode of “Sarah in the Shadows”. Tammy is celebrating her 5th with five new stories, two of which start this week, two next week, and the fifth the week after that. In Victorian times Sarah is thrown out into the street after her unfortunate uncle is thrown into debtor’s prison. All she has to survive on is her gift for paper cutouts and shadow play. The other birthday gift story, “A Lead Through Twilight”, is the last story in the issue (talk about bookends!). Carol Trent is losing her sight but won’t speak up about it or seek treatment because she is terrified her sourpuss uncle will send her away. But can she seriously expect to get away with hiding the fact that she’s going blind? And if the uncle finds out, will he do what Carol fears? Carol befriends a dog, Twilight, who could be her guide dog, but there is a definite mystery about him.

The birthday gift stories starting in the next issue are “The Fairground of Fear” (Diane Gabbot’s first serial for Tammy) and “Sit It Out, Sheri” (which will give John Armstrong a change from Bella). To make way for them, “Lights Out for Lucinda” is being finished off with a double episode. Lucinda has discovered the reason for the bizarre town of Blackmarket where everyone is being drugged into thinking it is still World War II and being forced to live that way. This peculiar ruse is all so the commander can provide a cheap workforce that are being paid 1940s rates instead of modern ones – to none other than Lucinda’s father! Fortunately for Lucinda it turns out he was a dupe and then a victim of blackmail before he finally manages to help put things right.

The last “birthday gift” story, starting 21 February, is a Hugh Thornton-Jones story, “Claire’s Airs and Graces”. Claire pretends to come from a posh background because of the snobby girls at her new school. This was the only Thornton-Jones serial in Tammy; his artwork was otherwise confined to Wee Sue episodes and Strange Stories.

It looks like the Storyteller is celebrating too because he is presenting two Strange Stories this week. Molly apparently is celebrating with a new story, but the title really should say “aviatrix”, not “aviator”. Although Bessie’s caption says “Bessie celebrates our birthday in her own special way”, her story has no bearing whatsoever on the celebrations or even on birthdays. She’s trying to help catch bank robbers but has forgotten the licence plate number of their vehicle. The police are trying to jog her memory but of course she is more interested in eating. Wee Sue’s story also has nothing to do with the celebrations. It’s all hijinks when Miss Bigger gets herself locked in a ball-and-chain because she disregarded a “do not touch” sign: “I’m a teacher. It doesn’t apply to teachers.” Silly woman!

Of course there is a competition to mark the occasion too, but this won’t be until next week.