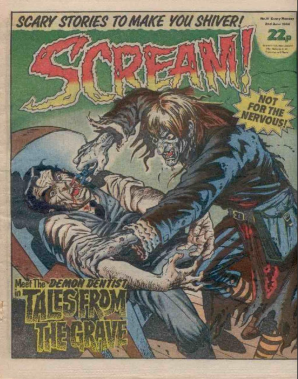 More attempts at Ghastly’s face this week. None succeed, but one extracts another clue and a second has the honour of being on the back cover (above) because it is so well drawn.

Stakis manages to escape Dracula’s trap and put the stake into one of his servants. That’s one down, but there are two more and Drac himself to go. Meanwhile, Drac has to resort to a condemned house for his new hideout, and shows that even he turns up his nose at drunks because booze makes their blood unfit to drink. He throws a good scare into them instead.

Groan. Uncle Terry kills again. This time it’s self-defence against two men who tried to kill him because of his appearance.

Max shows mercy to the latest visitor to his Thirteenth Floor, who is being punished for shoddy repair jobs, because he begged for it. This shows Max is learning where to stop with the Thirteenth Floor and trying not to let it go too far, as happened in some of the earlier episodes.

The (yeouch!) cover gives you an idea of how things end up for Sweeney Todd dentist Thorpe in the final episode of the Leper’s tale, doesn’t it? Yes, it turns out Makepiece the ghost had more than just revenge on his mind in killing Thorpe’s assistant Grimes. He uses his dark magic powers to turn Grimes into an animated corpse to wreak his revenge on Thorpe. Makepiece sends Grimes and Thorpe straight to Hell through their own Sweeney Todd chair – after having Grimes give Thorpe a taste of his own dental treatment, of course.

This week’s Library of Death tale is an intriguing one. It raises a few eyebrows and is full of surprising ironies, some of which you may find amusing as well as scary. The lead of a pop group mocks his fellow members for believing in ghosts although they use a ghost gimmick. So what happens when they shoot their latest video in a place with a reputation for genuine ghosts? Read it and find out. 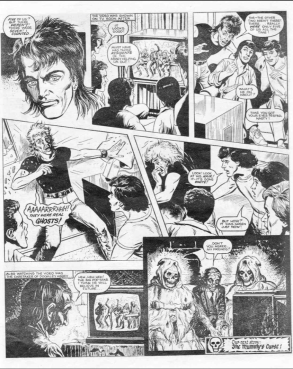 In “The Nightcomers” Beth rescues her brother Rick just as Cutler and his flunky are about to burn him alive, along with the house and the demon haunting it. However, it’s the flunky who gets burned alive and he throws himself down the well. Then another entity appears, and appears to be an unhappy female. Cutler clearly knows who it is and is terrified of it…but why do we sense it is more friendly than the demon?