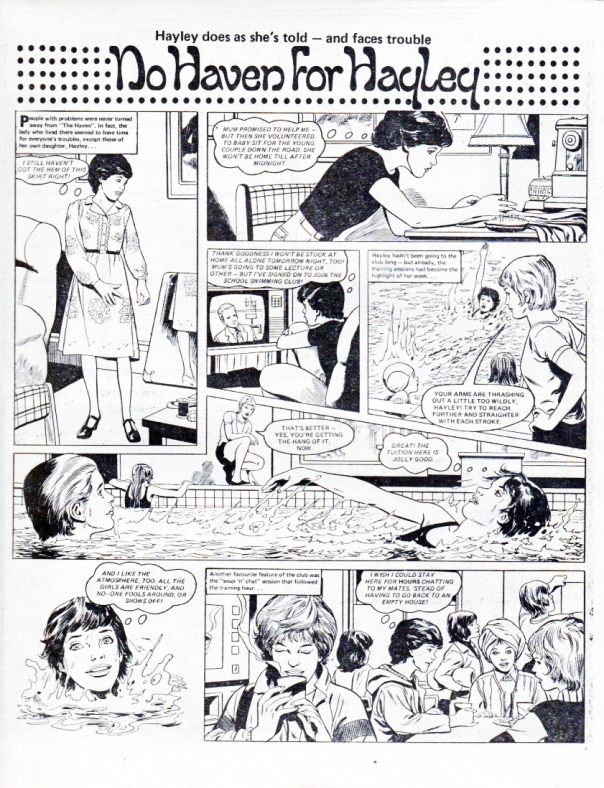 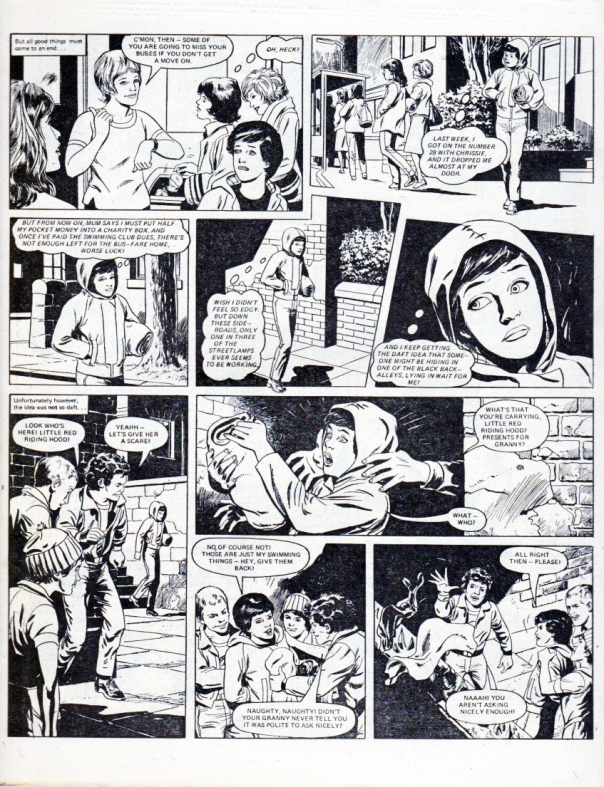 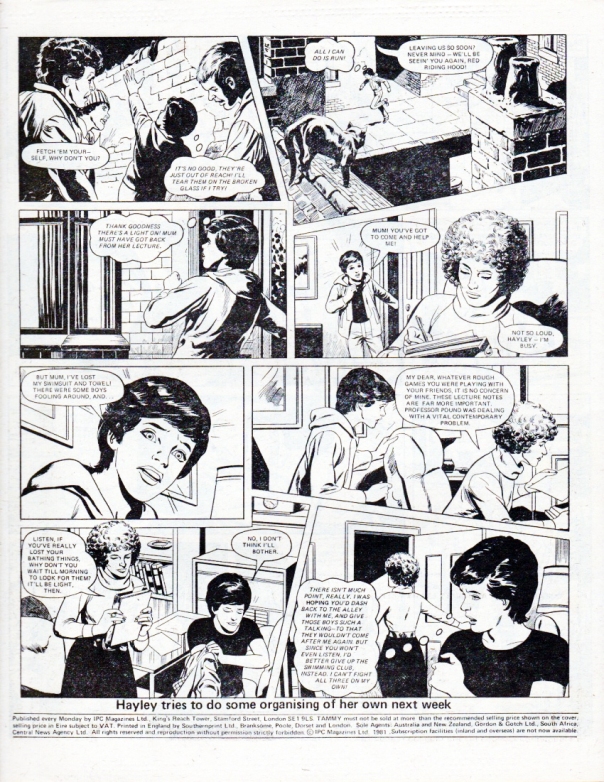 Mrs Moore’s home is known as “the Haven” because she works so much for charity. Unfortunately Mrs Moore is exhibiting symptoms of a workaholic. She is so busy and over-zealous with charity projects, and cramming her life with so many charity works that she is neglecting her own daughter, Hayley, and letting her down all the time. She takes Hayley for granted and makes her a dumping ground for tasks she has agreed to take on but has no time for because her schedule is too crowded. Worst of all, Mum never stops to listen to Hayley or help Hayley with any problems. Even if Mum does listen a bit, she just doesn’t seem to understand what Hayley is talking about and Hayley just can’t get through to her. Ironically, one of Mum’s campaigns is for “latch-key” children.

The situation gets worse when Mum decides to foster problem children – on top of all her other work. Typically for Mum, she makes the application without consulting or even telling Hayley beforehand; she takes it for granted that Hayley will help out.

Also typically for Mum, she lumbers Hayley with the job of minding the foster children because she won’t make the time for it with all her other charity work. As if that weren’t bad enough, the fostering itself is a nightmare for Hayley. First she is saddled with a pair of horrors who take over her room, mess up her things and constantly play tricks on her, but Mum won’t let Hayley even raise her voice to them. And Hayley is having to spend far more time looking after them than her mother, who is not making serious time for the foster children.

But if Hayley thought those two horrors made her life hell, they are nothing on the real problem child to follow, Fenella Briars. Fenella comes from the long line of scheming foster children who take advantage of anyone who fosters them and push out the protagonist with sneaky tricks. This is what she proceeds to do with Hayley and succeeds in turning Mum and everyone at school with her tricks while taking advantage of them all and playing on their sympathy and gullibility.

Then, when Fenella tries to con hospital patients out of money during another of Mum’s charity works, a Nurse Harris catches her out. Fenella tries to put the blame on Hayley, but guesses Nurse Harris has seen through her. And Nurse Harris has: “I’ve met her sort before!” She tells Hayley to put Mum in touch with her so she can put her straight about Fenella. But Fenella makes a hasty exit from the Haven before they can do so, on pretext that Hayley is making her feel unwelcome there. And communications being what they are between Hayley and her mother, Mum is not put straight about Fenella and thinks Hayley’s ‘spite’ is the reason for her fostering failure. As a result, Mum loses faith in Hayley, thinks Hayley is turning selfish and deliberately wrecked her fostering plans. As a result, the problems between them grow even worse.

When Hayley confronts her mother, Mum explodes over her fostering disappointment and shouts at Hayley. This is too much for Hayley. She blunders out of the house in tears and gets hit by a car. During a semi-conscious state Hayley rambles her problems with Mum to Sister Harris, who then has a serious talk with Mum. Presumably she also puts Mum wise about Fenella at long last, though the serial does not record this or Mum’s reaction.

Mum tells Hayley that she has used “a whole host of good deeds” to fill the gap left in her life following the death of Hayley’s father. But she now realises she has overdone it so much that she crowded Hayley out. Hayley agrees to forgive Mum and they are reconciled.

Six months later, everything has improved for both Hayley and her mother. Mum and Hayley now co-operate as a team on charity projects, with Mum listening to Hayley and even asking her for suggestions. For Hayley, “The Haven” is at last living up to its name.

This is a disturbing and well-crafted exploration of the damage that poor listening and breakdowns in communication can inflict on a relationship. It also proves that effective communication is essential not only for the people in the relationship, but also for the people surrounding them. As the communications between mother and daughter break down, it is not just Hayley who suffers. The bad communications also have an effect at Hayley’s school and, ironically, they undermine Mum’s charity work as well. Perhaps the greatest irony is when Hayley wants to organise her own door-to-door collection, but Mum, as usual, is too busy to listen or help. If Mum had just spared a few moments to listen, all that would have been avoided and she would have taken great pride in seeing Hayley run her own charity collection.

The serial makes deft and almost cruel use of irony to reinforce its points; for example, Mum remonstrating Hayley for being “selfish” on that fateful night, while she herself is selfish in thinking only of her work. It shows there is more than one kind of selfishness, and parents can take their children for granted, too.

The introduction of the foster children, and also a gang of yobs who attack Hayley, add the villainy that intensifies Hayley’s already-existing problems with Mum to the breaking point in the climax. Fenella’s ‘cuckoo-in-the-nest’ scheming has been used countless times in girls’ comics, especially in DCT titles. On this occasion it is used as a plot element rather than driving the plot itself, which makes it a bit different. But even without Fenella’s scheming, Mum’s fostering plans were clearly doomed from the start because she was just too busy, lacked the cohesion with Hayley to work effectively with a problem child for the reasons stated above, and it is obvious she never even thought the idea through properly in the first place.

Interestingly, unlike most scheming foster children in girls’ stories, we get a hint of a backstory with this particular schemer that could have been explained more. For example, we are told from the outset that Fenella is a problem child and “difficult”, but we are not told why. It certainly can’t be for the reasons why Hayley found Fenella such a nightmare as the social worker does not realise what a creep she is and thinks she is a person to be pitied and in need of help and a good home. We get some hint that Fenella has been through a variety of homes that didn’t work out. Is this because Fenella treated other foster siblings the same way she treated Hayley? Or was she truly difficult in those other homes and decided on a different tack when she came to the Haven because she wanted to take advantage of it and its reputation as much as she could?

The reason Mum made herself way too busy with charity work – to compensate for the death of her husband – is credible and rooted in realism. We can even imagine that Mum became addicted to charity work. But she became so consumed with charity work that she lost sight of other things in life, especially Hayley. Girls’ comics have frequently warned about not taking things to extremes (e.g. Jinty’s “Worlds Apart”) and do things in moderation. Apparently, even good things like charity work or generosity should be done in moderation as well, because taking them too far could do more harm than the good they are meant to do. DCT made similar points with stories like “Hard Times for Helen” and “Minnie the Meanie”, both from Judy.

The resolution of the story – Hayley getting hit by a car, rambling her problems to a person in authority who then has a word with Mum – is hardly new in girls’ comics. For example, “Hard Times for Helen” used a similar resolution. But what makes the plotting better in this case is that the accident occurs at the end of the penultimate episode. This enables the whole of the final episode to be used for the resolution of the story instead of a few panels crammed onto the last page, so there is more scope for development of the resolution. We are even shown panels of just how things have changed for Hayley after she was discharged from hospital, not just Mum apologising and promising things are going to be different, as Helen’s mother does at the end of “Hard Times for Helen”. The only shortcoming is that we are not shown Mum’s reaction when Nurse Harris tells her the truth about Fenella and that she had been wrongly blaming Hayley. Considering that the misunderstanding over Fenella is what caused the accident in the first place, not showing how the misunderstanding is resolved is glaring. Perhaps they felt they didn’t have the room to cover it, but couldn’t they have tried to squeeze in an extra line or two to do so? It would have made the ending more satisfying for the readers.