Goof from the Comics UK Forum has kindly supplied a list of the comics work done by John Richardson over the years. 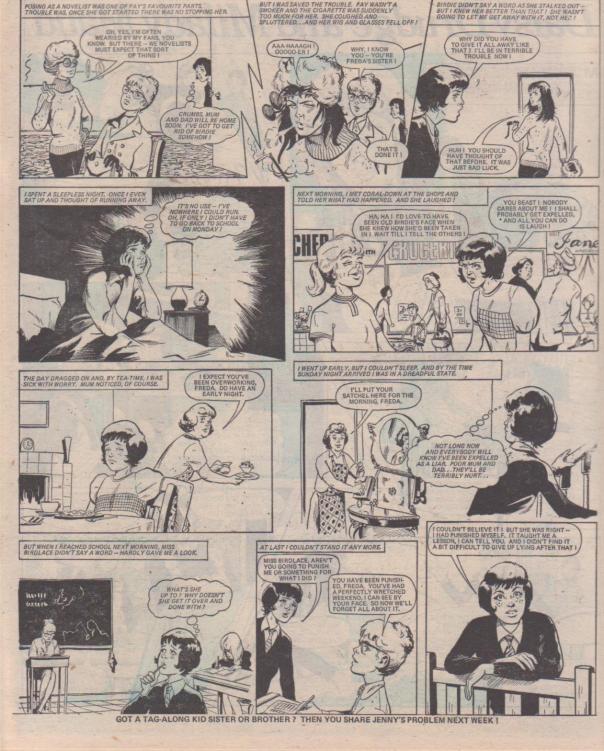 “Is This Your Story?”, also known as “Could This be YOU?”, was one of Jinty’s more unusual, if short-lived features. Actually, it was a reprint from June & School Friend, and was originally published as “Could This Be You?” It was a true-life feature, and each week it would run a complete story that was based on common problems among girls. But unlike the teen magazines, it was not based on letters that readers had sent in where they recount their real-life experiences or outline a problem. The stories were composites of common real-life problems.

The title “Is This Your Story?” was meant to be a touching strip that strike a chord with readers, hence the underline under “Your”. Later it reverted to its original title, “Could This Be YOU?” Would any of the readers have encountered a situation similar to the one in the story? If so, they would see themselves in that story. If not, it might be a situation they were familiar with or a warning if they did encounter one.

The first episode concerned a girl named Peggy who rejects her new dog because she still grieving for her beloved Punch (maybe her parents bought the new dog too soon). The new dog is miserable at not getting her love and on the very verge of being sent to the kennels when Peggy takes a liking to it at the very last minute.

Other problems the series tackled included a girl called beanpole, little sisters always tagging along, getting jealous when a brother finds a girlfriend, and resenting a new stepfather. Common enough problems that many readers could identify with one way or another.

Sometimes the stories were told by the girls themselves. One case is Shirley, who feels her parents are treating her like a baby when they say she is trying to grow up too quickly. Shirley sneaks off to a night on the town to show her parents that she is old enough to do it. But she runs into trouble and a night of terror before her local bus driver comes to the rescue. Afterwards she tells us that her parents were right. And they were pretty sporting parents too, in not giving a Shirley a row for what she did. Instead, they say they understand, having been young themselves (and probably had the same trouble with their parents!).

Some of the stories showed real insight into human psychology by more drawing on reality than patronising moralising. For example, Freda’s problem (above) is telling lies. This is not because she is deceitful by nature but because it is a habit she has gotten into. But then she tells one lie too many (she had to slip up sometime) and in danger of facing serious trouble at school. And we get another lesson into the bargain – don’t try smoking!

In another story, Claire impresses all her friends because she is always so stylishly dressed, and no outfit is the same. But in reality Claire helps herself to her sisters’ clothes to make that impression because she is dissatisfied with her own. And Georgie’s problem is that she flies off the handle too readily and often finds herself hurting people’s feelings very badly. She always apologises and really means it, but she thinks she cannot control her temper. The class sends her to Coventry for a day to teach her that she can and must control it. Afterwards, Georgie does make serious efforts to keep her temper. It is not easy, but she finds she is much nicer now.

Of course, each story always ends happily, with solutions being found to the various problems. Some of those solutions sound a bit improbable and even drastic. For example, Claire’s sisters punish her by locking up their wardrobes and hers, so she is forced to go to school in her mother’s dress. It is too big for her of course and gives everyone a laugh. The whole story comes out, but instead of teasing her over it for days on end, the girls are understanding and help Claire out with expanding her own wardrobe. They must be some classmates you don’t see every day. Freda, the habitual liar, is extremely lucky to have a teacher in a million with Miss Birdlace (above). In real life, she would be far more likely to find herself hauled up before the head and get a rocket the size of a megaton.

Towards December, “Is This Your Story?” did not appear in some issues, and it began to take on the feel of a filler story than a regular feature. Was it not as popular as Jinty hoped? Was there not enough room for it in some issues? Or did the editor indeed start using it as a filler feature rather than a regular feature? Indeed, it only had a two-page spread which made it easier to use for that purpose.

“Is This Your Story?” was the second (and last) of Jinty’s strips to foray into the world of the agony aunt and real life problems; the first had been the short-lived “Jenny – Good  or Bad Friend?” in 1974, where Jenny tells the story of how her friendship broke up and the editor questions her along the way, and readers to make up their own minds at the end. The Jenny formula was not repeated, which suggests it did not work out. “Is This Your Story?” was more substantial, but it did not last long either. Perhaps Jinty found that real-life problem based strips were better left to teen magazines and she should stick to problem pages.