This is a post covering more than one celebration. It is the 600th post on this blog, posted on the 11th May, the day that Jinty was first published 43 years ago. And while we normally don’t make much of the anniversary of the blog itself, it has been a little over three years since it first started, back on 15 April 2014.

Jinty likewise also didn’t make much of its anniversaries. There is a celebration cover for its 200th issue but that mostly consists of an Easter picture and some text stating that it is a celebration issue. And while the cover of its 5th anniversary, above, is at least specially-drawn for the occasion, there is nothing much more inside to remind readers of the exciting times from the previous years. We can do more than that, in this blog post!

Well of course on this blog you can go back and read posts on individual issues, either in the order in which they were originally posted or (rather more conveniently) as an index, in date order. This also shows you how far we’ve got through the list of all 383 issues of Jinty ever published. For much of the run, we have now got long unbroken streaks of consecutive issues. There are gaps here and there of two or three issues together where we still have to fill in issues not-yet-blogged, but these are much fewer than used to be the case. (To give you context of the publishing of the time, there is also a much shorter list of issues of other titles which we have written about. It’s an area we focus on less, of course, but we will continue to add to nevertheless.)

We are still plugging gaps in the list of stories, too, but there again the gaps are narrowing. If you look at the list of Stories by Publication Date you can easily see which stories are yet to be posted about. Most of the key stories have already been covered, but there are still some crackers to come. Mistyfan is promising us “Tears of a Clown”, and on my own list I need to get to “Somewhere Over The Rainbow”, the popular and extremely long wartime tear-jerker from Alison Christie and Phil Townsend.

In terms of other sorts of blog achievements, of course 600 posts is itself a really good number to have got to, in as little as three years. I would have been happy to manage about one post a week, but thanks to Mistyfan’s energy and our combined bright ideas on new things to tackle over that time, we have managed three or four times that rate. (I must give due credit to Mistyfan, who writes about one and half as many posts as I do!) The readers of this blog will be glad to know that even though we are closing the gaps on individual issues to write about, we still have many creators to cover as well as the story gaps mentioned. And although issues of other titles have featured previously as context for Jinty‘s family tree, I can see that we might need to cover more of these so as to continue to trace the path of different creators, story types, and themes throughout the years.

Jinty never had a chance to continue even as far as its 8th birthday issue, alas. I wonder what it would have been like if it had lasted longer? There would certainly have been a lot more great stories and excellent art to read and enjoy, but would it have stayed as inventive and energetic as 2000AD has done in its 40th year? Bunty lasted from 1958 to 2001 and had strong stories even to the end, but I think it would be hard to class the latter-day content of the title as ranking with its heyday. A longer-lasting Jinty would have had to reinvent itself more widely: I’m not sure how that would be possible in the constraints of the British comics market, especially with comics marked out as being more and more ‘for boys’. Esther, the Spanish “Patty’s World”, managed it, with stories being written specifically for the Spanish market and grown-up readers still seeking out the title of their childhood and sharing it with the next generation. Perhaps not a coincidence that it succeeded so well: Esther was always down-to-earth and realistic, compared to stories about boarding schools or ballet, so it stood more of a chance to tap into the mainstream urge for everyday stories that lies behind the popularity of soap operas. Not that soaps are the only way to produce popular entertainment, of course: Jinty and the like could perhaps have tapped into the science fiction or fantastical elements that worked so well in their pages. For sure, something  different would have been needed. Wouldn’t it have been great to have seen the publishers give it a go!

I have recently been to Madrid and saw two relevant comics items when I was out there. One was a free item, sponsored by Telefonica, about Paralympic swimmer Teresa Perales. (Digital version available via this link.) It’s a very interesting and well-done comic overall, although as an anthology there are abrupt transitions in style from the serious to the humorous to the positively silly. The overall tone is pretty serious in that it recounts Perales’ achievements and tribulations as a Paralympic athlete, but it also has plenty of time for humorous and revelatory asides on on the difficulties as a wheelchair user of making one’s way through a world designed for able-bodied people.

The first story in the comic was by Purita Campos, the very popular artist on Patty’s World. This caught my attention and got me to look twice at the free comic in the first place, but it also meant that I had Campos and her popular creation in mind when I went into a bookshop a day or two later, at which point I asked if there was a collected edition of the Spanish edition of Patty’s World – “Esther Y Su Mundo”. Indeed there was – a handsome reissue of at least 15 volumes of the story, advertised as “One of the great classics of Spanish comics in a new re-coloured edition”. I bought volumes 1 and 15, so as to be able to get a sense of how the comic has developed over the years since its first pages were published in 1971. I am not sure what year of original publication Vol 15 relates to, ie how long a time-span is represented in my two selected volumes; certainly a number of years, but I suspect not the full original publication span of 1971 – 1988. 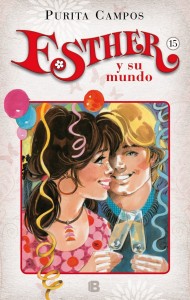 They are solid, substantial-feeling editions: 96 pages long, which is slightly less than the 114 pages of the Rebellion Misty reprint (and substantially less than the 192 page whopper reprint of Monster), but the hardback binding, handsome red cloth covering of the spine, and the full colour cover and insides, make for a very enticing package. The price is pretty comparable to the UK reprints I mention above – around £15 – £16, with fluctuations depending on the exchange rate with the Euro. The end papers are a greyscale montage of images from the various years covered in the volumes, and showcase Purita Campos’ beautiful art very nicely.

“Patty’s World” is not something I knew anything at all about until quite recently, and I hadn’t ever read any of it either in the original version or in translation. The first volume starts with Patty Lucas (or Esther Lucas as I will now think of her, having only read the Spanish version!) just turning thirteen. Lots happens to her in the pages of the comic – the pace is quite different from the 14 – 18 episodes of what I think of as a typical girls comic story. This story doesn’t build up and up to a dramatic finale – in this first volume, Esther fights with her family and her best friend and then makes up again, gets into trouble when someone thinks she is shoplifting, worries about her mother getting remarried, pines after a boy from her school, and has a mutual hate society going on with nasty Doreen. It’s all down to earth and (more or less) realistic, apart from the frenetic pace that it all goes at.

It’s not the sort of story that I normally go for very much; and for me the first volume was more of a curiosity item than something that hooked me. However, Volume 15 felt like it would do more for me – it develop story arcs a little more slowly and gives them more time to breathe. I think the stories are also actually better, too: the first arc in the book is genuinely amusing (Esther and her friend Rita swop lives for a day and it gets very silly). It also clearly has more of an edge, though this is really an extension of what we saw right at the beginning. One of the things going on in Esther’s life at thirteen is that her father died some years previously and her mother is considering remarrying, with all the adjustment that this brings. And in Volume 15 Rita’s mother is shown to have died in a previous volume, and her father has since remarried – the stepmother role is shown in a positive light even though tempers can flare. It’s all very human and warm. I think the focus on boy-chasing would put me off if I was embarking on a prolonged read, but overall I can certainly see how readers could end up living in this world and greatly enjoying the characters and the stories.

Of course for many people the draw will also be the art. Purita Campos is great at fluid, expressive characters of all ages, but her protagonists as they move from being girls to young women are her particular focus of course – and she imbues everyone with their own distinctive looks and ways of being, from flirty Rita and annoying Doreen to girl-next-door Esther. The girls are sassy and sexy without crossing a line, the boys are rather cute, and it’s all fun.

Will we ever see a UK reprint edition? The title that it originally appeared in, Princess Tina, started to be published before the 1971 cutoff date that places it outside of Rebellion’s ownership, but the story and the character was published after 1 January 1971. The fact that the Spanish edition has gone through numerous reprintings and new editions clearly indicates that those rights must be clearly established by someone, even if the UK rights have historically been somewhat tangled. The Spanish readership seem to have an ongoing love for this character: the back cover blurb acclaims the comic as a ‘great classic of Spanish comics’ which has been loved by ‘three generations of readers both male and female’. The UK doesn’t have anything like as strong a memory or feeling about this story, though there will certainly be many with fond memories of it in this country. But if this story and this character – which after all is actually set in the UK, with right-hand drive cars, British bobbies, and double-decker buses! – is so popular in Spain with a general audience, it has perhaps the strongest chance to break into that teen market than any of the other Rebellion content acquisition. That is, so long as this is even part of that purchase…