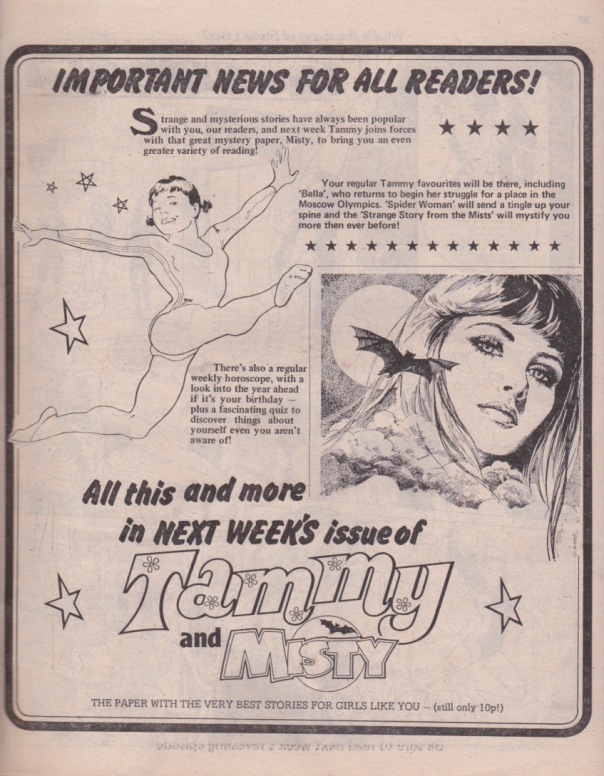 This is the Tammy that came out the same week as the final issue of Misty. So what did the issue have to say about the Tammy & Misty merger and how did it prepare for it?

The first hint of it comes on the cover, with the Devil in a sandwich sign announcing “there’s exciting news in Tammy – on sale now!” I’ve always been struck at how that Devil character bears a striking resemblance to Pickering, the bully butler in Molly Mills. Is Tammy having a bit of an in-joke here?

As far as room goes, there is not much space to make room for a reasonable proportion of Misty stories. All the serials are still running and one, “Sister in the Shadows”, is only on its second episode. The announcement about the merger informs Tammy readers that not only will all their regular favourites be there but there will also be a new Bella story starting. In other words, Tammy isn’t reducing any of her own features to make room for more features from Misty, such as “Beasts”, “Nightmare!” and (we suspect) “Monster Tales”. There must have been great disappointment among former Misty readers that the proportion of Misty was miniscule compared to the Tammy one. I myself hoped that once the current Tammy stories finished more Misty stories would take their place, but I was disappointed there. Why couldn’t Tammy have done some double episodes of Hannah, the serial closest to finishing, so she would be finished off by the time of the merger and there would be more space for Misty stories in the merger issue?

In discussion of the stories, in part two of “Sister in the Shadows” Wendy continues to have what must rank as one of the worst first days at school in history. On top of the king-sized collywobbles she came with, she is encountering constant embarrassment and humiliation as teachers keep comparing her to her sister Stella, who was once the star pupil at the school, and Wendy can’t live up to their expectations. It’s not endearing her to her fellow classmates either and the stage is clearly set for some bullying.

“Daughter of the Desert” features a school that is strangely reverting to a desert pattern after an Arabian princess comes to the school. In an exciting but very odd episode, the two protagonists find themselves in a quicksand trap, which is supposed to be part of the strange desert pattern. Then the quicksand mysteriously disappears into a hard concrete road when the girls return with their headmistress to investigate.

Cindy decides to throw away her ballet career for the sake of her swans, who are being poisoned by chemical pollution. Despite the pollution the swans find the strength to persuade Cindy to continue, much to the chagrin of Cindy’s jealous rival Zoe. Now Zoe is now back to scheming against Cindy to become the star dancer of their village.

Molly Mills gets promoted but deliberately sets out to lose it once she decides she was happier with the status quo as a servant. Miss Bigger buys a sedan chair for charity – but trust her to lumber Wee Sue and her friend with the job of carrying it to her place! Then thieves steal the chair, and it’s up to Wee Sue’s big brain to sort them out. The promise of a hamper lures Bessie out for ice-skating practice, but of course there have to be hijinks.

Hannah’s latest attempt to hit the headlines fails again because her prop got vandalised. At first she suspects her sisters, who have been sabotaging her every effort so far, but now she isn’t so sure. Sounds like a mystery to tie up, and will it have any bearing on Hannah’s campaign to prove herself?

There is a double-up of Strange Stories this week. The first is about a new girl named Stella who is perfect at everything. But Tracey Roberts thinks there is something odd about it all, and about the star on the bracelet Stella always wears. Then, when the star falls off Stella’s bracelet she falls mysteriously ill and Tracey gets strange visions from her parents urging her to find the star. The second is a parable about how beauty can be found even in the most unexpected places. Once Chris Dale learns this lesson she agrees to have the eye surgery she had refused before.

Incidentally, the blurb announcing the new Bella story says she will have a crack at the Moscow Olympics (which of course will be a “struggle”). Older Bella readers would know that she had never succeeded in competing at the Olympics. Her 1976 Montreal bid only got her as far as performing in the opening ceremony. Will Bella succeed in competing at the Olympics this time?