The picture libraries also provided stories about favourite regulars such as The Four Marys, Wee Slavey and The Comp. Occasionally there were variations in the formula, such as a story being told over two picture libraries, or a picture library featuring several short stories instead of one complete one. One example was “Scream!” (not to be confused with the IPC comic of the same name), which told five scarey stories to make you scream.

Picture libraries were a long-running staple of four of DCT’s titles: Bunty, Judy, Mandy and Debbie. The Bunty picture libraries lasted 455 issues. This is not surprising as Bunty herself is the longest-running girls’ title in history. The Mandy books finished at the same time as the Bunty ones, but at 277 books. Judy produced 375 books and Debbie 197 books. Towards the end of the run reprints appeared although original stories continued.

Tammy and Jinty were never given any picture libraries although they lasted the longest after June. Yet the photo-story comic, Girl (series 2) was given her own picture library. This lasted for just 30 books. Miniscule compared with the rich histories of the June picture library and its counterparts from DCT. But what gives Girl Picture Library its place on this blog is that although some of the libraries were original material, many of them also reprinted material from Jinty and Tammy.

Most of the reprints appeared under revised titles, some of which were awful and showed little thinking. For example, “Vision of Vanity Fayre” from Tammy was reprinted in Girl Picture Library #2 under the the extremely lame title of “Dear Diary”. Strangely, the last three Girl picture libraries reprinted Tammy stories under their original titles. 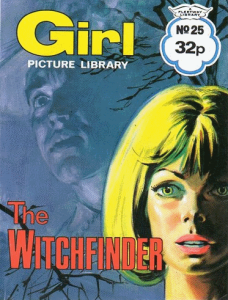 There were some oddities and even downright sloppiness in the run, which may indicate what sort of budget or editorship that the series was running to. For example, the cover of #16 (reprint of “My Heart Belongs to Buttons”) changes the appearance of the heroine. Readers must have been surprised or irritated when they opened the issue and found the brunette heroine inside bearing no resemblance to the girl on the cover. And the girl who appears on the cover of #25 (reprint of “Shadow on the Fen”, above) has the wrong hair colour – she is blonde on the cover but is a brunette in the story. The witchfinder too looks different – he looks younger and has a fuller face than the craggly gaunt face rendered by Douglas Perry. Still, it is a beautiful, haunting cover. 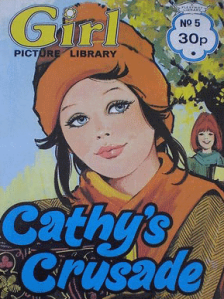 A more striking oddity was “Sue’s Daily Dozen” being reprinted over two volumes: “Spellbound” and “Bewitched”. But there was no indication in “Spellbound” to say “to be continued”. Readers must have wondered why the story suddenly stopped abruptly. The remaining pages are devoted to “Tiny Tina”, which is Wee Sue under a revised title. “Cathy’s Casebook” also appears in two volumes: “Cathy’s Crusade” and “Dr Cathy”. But the reprint is even odder in that “Dr Cathy” does not come immediately after “Cathy’s Crusade” – “The Old Mill” is in between them. 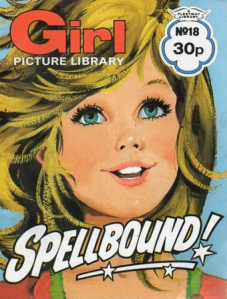 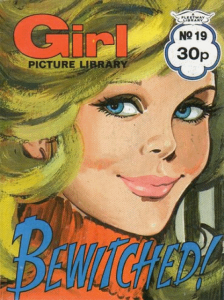 Naturally, some material and panels had to be cut or modified to make the reprints fit into 64-page pocket size volumes. For example, “Moments of Terror”, which reprints “Waves of Fear”, deletes Priscilla Heath and the orienteering club sequences. Both of these played a key role in the resolution of the story in its original run – realising that the panic Clare Harvey had while her friend was drowning in a cave was a claustrophobia attack and not the cowardice that has made her the most hated girl in town. The revelation is now made by Clare’s mother after Rachel tells her about the trick Jean pulled – playing on Clare’s claustrophobia – to get her expelled.

On the other hand, the editing also mercifully reduces some of Clare’s ordeal; for example, the hostility Clare receives from the townsfolk has been removed completely. Some of the bullying at school and the harsh treatment Clare gets from her parents has been deleted as well. The editing is pretty seamless, but there is one glitch: when Clare is pushed to the brink of suicide, she thinks the business at the club was the last straw. With the orienteering club deleted, readers must immediately have wondered “what club?” or “what’s missing here?”. They would know it’s been reprinted from somewhere else because there was always a caption saying “previously published” for the reprint material.

Cutting out material also had the unfortunate effect of removing key turning points in some plots. For example, the reprint of “Thursday’s Child” removes the scene where an evil flag forces a man to nearly saw his own hand off. Yes, it’s gruesome. But in the original run it was what made the villainess, Julie, who had been using the flag’s power to conduct a revenge campaign against her future mother, Thursday, come to her senses and realise the flag had to be destroyed.