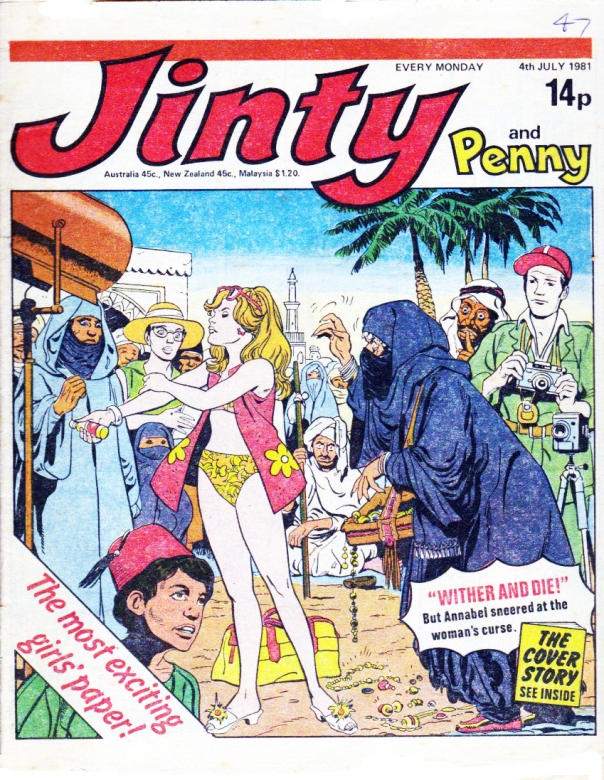 Girls’ comics didn’t bother much with Independence Day, but this issue of Jinty does as it’s bang on 4th of July. In honour of the occasion, Jinty presents a quiz on how independent you are: clinging ivy, sturdy oak tree or prickly pear? We also learn 4th of July is Sir Roger’s birthday, so 4th of July doubles for him as a birthday celebration.

Tansy is looking forward to an independence day of a different sort – the day in July when the summer holidays begin, which she has labelled “Freedom Day”. It’s a camping holiday for the Taylors, but of course there is no independence from the usual mayhem with Simon and Peter around.

In Samantha’s world there is anything but independence for the other five girls. Although Samantha’s father is on the throne, it is she who rules her world as a vain, power-mad tyrant and has everything and everyone cater to her beauty. But when Samantha uses Mo as a stool, Mo openly revolts against her. Samantha, who never liked Mo to begin with, responds by clamping her in the stocks – and she is to stay there until she’s nothing but a skeleton.

Pam wants to pursue music, but finding the right instrument is causing problems. After failures with the tuba and trumpet, she finally settles on the trombone with Gran’s help, but we get a hint her music problems won’t end there.

Fagin finally pushes Mum too far and she makes good her threat to put him in the dogs’ home. Even so, Olivia is still struggling to find the food to feed that appetite of his as the dogs’ home looks like it can’t.

The text story is straight out of Misty. Annabel Hirst, a beautiful but arrogant model, has a curse put on her as a punishment that will cause her to “wither and die” at midnight upon the full moon. As the time approaches, Annabel is reluctant to make an appearance because her appearance seems to be withering…

The Gypsy Rose story is another recycled Strange Story. Jean Forbes is a big speedway racing fan and the mascot of her brother’s team. Then she gets a strange dream that something terrible is going to happen to her brother on the speedway. How will this test her status as team mascot?

A boy named Sam is being a real nuisance for “Angela’s Angels”. He’s always trying to get into hospital with phony claims of being ill. He only does it because the hospital is a better place for him than his own home but Angela throws him out. Then Sam’s x-ray reveals a real illness and he needs to be treated immediately – so they have to find him, fast!

Treating pupils like little kids is one of the things Lydia really hates about her father’s ideas of grammar school discipline. But it’s not just the pupils he’s treating like little kids – he’s doing the same with the Castlegate teachers as well. He’s butting in on their lessons and trying to force them teach things his way. How rude! The teachers get so aggravated that they go into an emergency meeting on how to deal with him. The pupils are doing the same with a council of war. My advice: go on strike and mass demonstration against him. Make sure it gets full press coverage! And show the governors: what the hell were you thinking in appointing this gargoyle from the boys’ grammar school as headmaster?