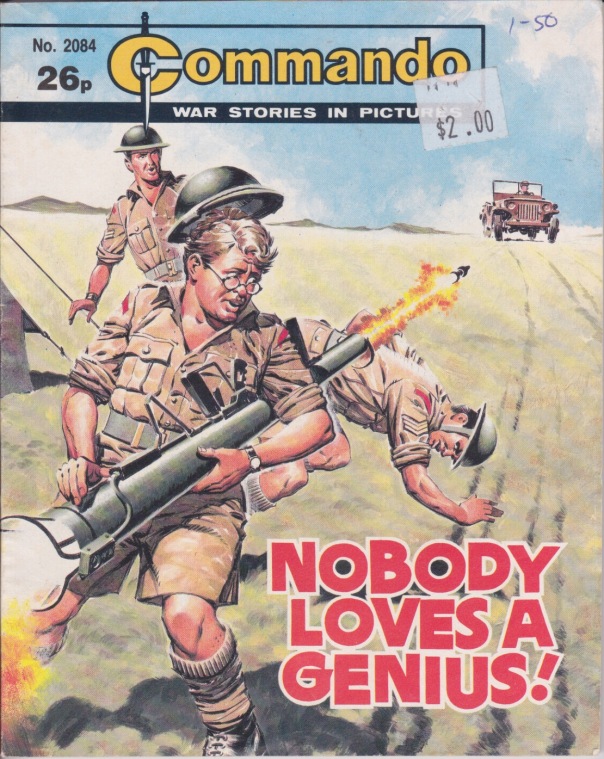 Special thanks to Colcool007 for credits

Sergeant Jim Bates is in a platoon in the 8th army led by Commander Paul Rowland in the North African campaign against General Rommel “The Desert Fox”. But for them, a more aggravating problem than Rommel is Private Hubert Wellington, “the most gormless, useless lump Jim had ever come across”. Hubert is a walking disaster area, which is due to gawkiness and nervousness rather than stupidity. He is arguably the worst soldier in the platoon and seems quite oblivious to it.

However, Hubert has a good nature, and he does have his uses. For example, he has a magic touch with anything mechanical and can repair vehicles. All the same, only Jim has any patience for Hubert and tries to turn him into a soldier; the others all think Hubert’s efforts help Rommel more than them. When Hubert’s gormlessness blows up the lieutenant’s jeep with a Panzerschrecker (the German version of a bazooka), the lieutenant decides he has to go, and puts him into an explosives course in Cairo.

After North Africa, the platoon goes on to fight in the Italian campaign. However, they keep running into booby traps set by a German explosives expert nicknamed “Wehrmacht Willi”. His nickname comes from the signature he always leaves with his work: “Ein Geschenk von Willi” [a present from Willi]. Willi’s booby traps are soon their biggest dread.

Then they run into someone else – Hubert Wellington, who had requested permission to rejoin the platoon. Hubert came out top in his explosives course, and is soon put in charge of setting booby traps for advancing Germans. Unfortunately Hubert overthinks things and does not set the explosives directly on the path but on the sides of it as he thinks the Germans would not take the direct route in case of a trap. They should have, but they take the direct route, bypassing the explosives completely. At least the platoon manages to fend off the Germans.

Next, the platoon approaches an old ruin that they suspect the Germans are using as an observation post. When they investigate the window they set off a booby trap, which alerts the Germans to open fire. After the barrage ends they send in Hubert to check for more booby traps. Jim is amazed at Hubert’s new calmness as he deactivates three more booby traps, which have Willi’s trademark signature.

After this, Hubert is appointed platoon explosives expert, and he gives the impression he is coming into his own at last. Hubert is soon setting up his own booby traps for the Germans and leaving his own signature a la Wehrmacht Willi. The thinking behind his traps is very ingenious and is getting into the heads of what the enemy will think when they approach the traps. Hubert’s nervousness is not a problem when he is busy, such as setting or deactivating traps.

But when Hubert has a lapse into nervousness because he’s not busy, it gives the platoon’s position away to the Germans, and they open up a ferocious barrage. The commander has serious thoughts about throwing Hubert out again, but Jim persuades the commander to give him more time to boost Hubert’s confidence. 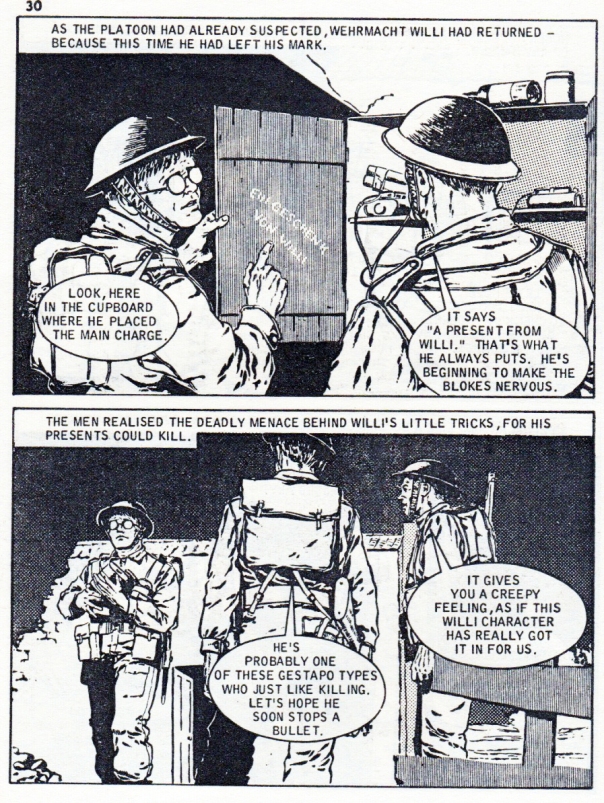 The advance starts again. The platoon has the job of keeping a bridge secure, but first they have to reach it. Their advance on the bridge grows fretful because of Hubert getting nervous again, which is what makes him such a problem. But things change when they advance the bridge and Hubert is quick to check the track for booby traps. Sure enough, it’s been rigged with Wehrmacht Willi’s handiwork, and very skilful handiwork it is too. The commander thinks Willi moves around quite a bit and wonders why.

But just as they finish with the explosives, the Germans open fire again. As the advance guard has not arrived, the platoon has to fend off the Germans alone, but they manage to do so. Hubert’s own booby traps repel any returning Germans, and he also gets the final triumph, with another Panzerschreck. The platoon has the bridge clear and secure by the time the advance guard finally arrives. 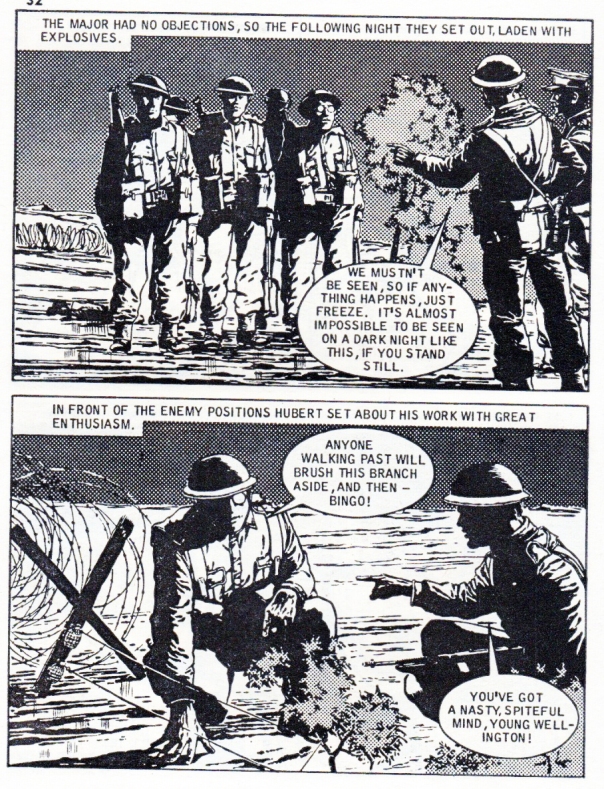 They then stumble across another building the Germans could be using as an observation post. So they need to check it, but they sense a trap. The German soldiers fire shots from the building and then flee. Nonetheless, they feel this is where the remote control was activated, which means Willi and his booby traps could be around. So it’s a job for Hubert, who makes fast work of deactivating Willi’s traps. But there is someone upstairs, so Jim and Hubert go to investigate. Hubert says he is no longer scared, and from then on his nerves cause no more trouble.

Upstairs they capture Wehrmacht Willi himself, just as he is signing his last-ever booby trap. Jim is astonished to see that Willi is almost a twin for Hubert Wellington, only he looks even more of a nerd. The platoon can’t stop laughing when they see what the dreaded booby trapper actually looks like, but Hubert doesn’t get the joke at all.

Commando definitely meets “Revenge of the Nerds” in this issue. Although Hubert’s nerves and gawkiness gets on everyone’s nerves, the most irritating thing about him is that he is, in modern parlance, a nerd. Even after he overcomes his soldiering problems and becomes a model soldier, the others still find him a bit annoying because he’s “a bit of a genius”.

The same could be said for Willi. When Willi is finally revealed to be a nerd too, and presumably got left behind by the other German soldiers because of it, you can’t help but feel a pang of sympathy for Willi. We have to wonder if Willi’s platoon ridiculed him a bit for being a nerd, despite his genius in setting booby traps. Could Willi have even had similar problems to Hubert and given his platoon aggravation before he discovered his own genius for explosives? Willi and Hubert are such peas in a pod in terms of genius, talent, appearance, and even in the way they think that you sure suspect this was the case.

Many Commandos go for grim and dark stories, but this one goes for more humour with the Gomer Pyle-type. Eyebrows are raised when Hubert is put on the explosives course. It sounds about as prudent as putting the Jinx from St Jonah’s on one. So it’s quite a twist when the explosives course proves the making of the kluzty Hubert Wellington. It doesn’t come all at once though; Hubert still has to overcome the nerves that made him such a disaster area to begin with and he still has lapses into his old jinxing. It’s quite realistic and credible for the making of Hubert Wellington not to come all at once but to develop through the fight against Willi. 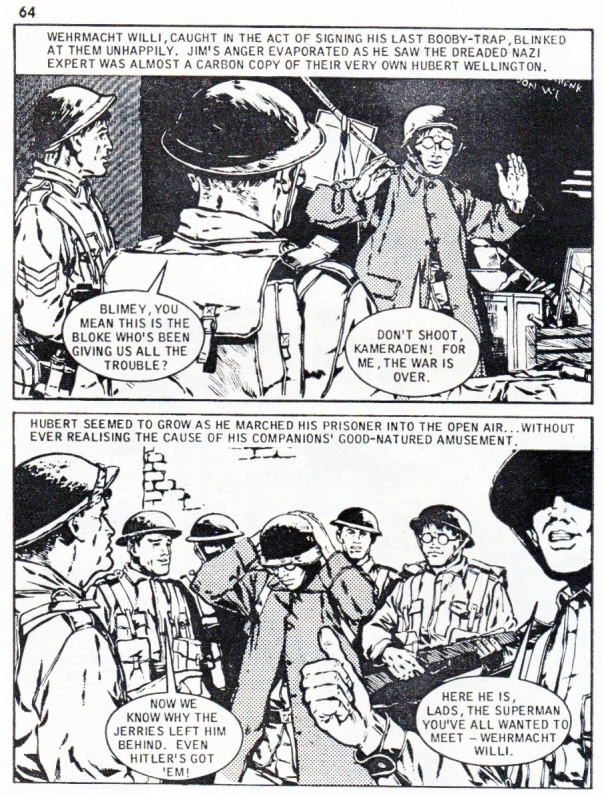 Even more humour comes from the final twist in the story and the joke that the irony has pulled on everyone. During the course of the story the commander comments that “Maybe [the Germans] haven’t any Hubert Wellingtons on their side. I wonder if they’d like one – free.” Little does he know that the Germans do in fact have a Hubert Wellington, in the form of the “Wehrmacht Willi” they dread so much. When this is finally revealed, the platoon realises that “even Hitler’s got ‘em!”. So it seems that even Hitler gets his share of nerds.