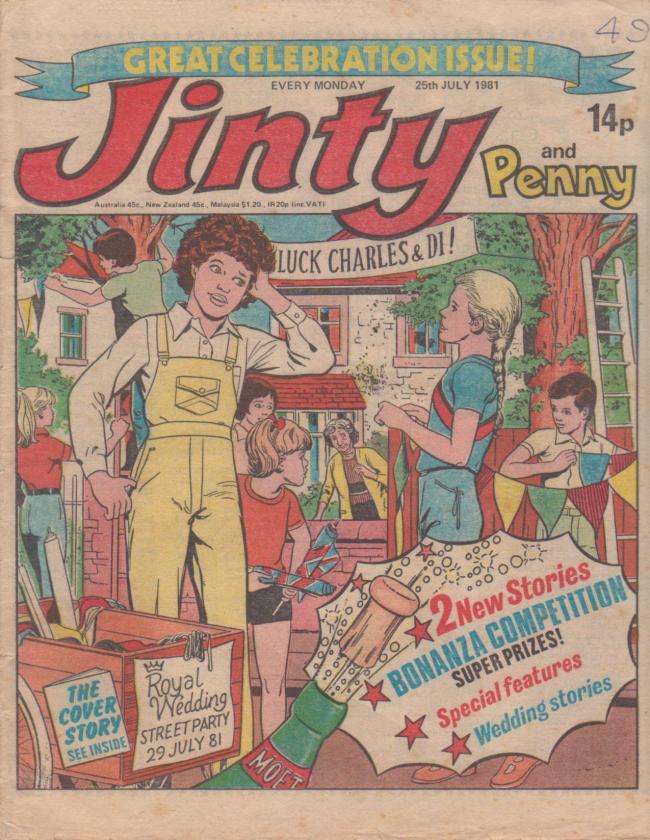 This is the last Jinty to feature the Penny logo. It would return, but be reduced to a smaller size, before being dropped shortly before the merger with Tammy. In this issue, Jinty commemorates the wedding of Prince Charles and Lady Diana Spencer on 29 July 1981. So the issue is big on the wedding theme. The text story, “With Best Wishes”, brings us a story based on the royal wedding. For this reason, the text story is on the first page of this issue, which is very unusual for a text story. Jinty also has a competition to honour the wedding, with Kodak cameras as top prizes, and the back cover gives instructions for making party pieces for your own royal wedding celebration. And there is “Happy Ever After”, a feature telling us about the things to use to wish for happiness and good luck in a marriage.

Good luck is lacking in Gypsy Rose’s wedding themed story, “The Veiled Threat”. Liz is getting married, and her Aunt Vicky tells Liz how her mother forced her to marry a man for money although she couldn’t stand him and protested loudly at the wedding. When Liz wears Aunt Vicky’s veil (and there seems to be a black cloud hanging over it), she starts acting the same way Aunt Vicky did at her wedding. Is it wedding nerves or the veil? In the end, Liz gets happily married – without the veil. (By the way, this was a reprint of another Strange Story, and I have the original to prove it.)

Tansy of Jubilee Street also celebrates, with the family and friends determined to go to London to see the wedding. But they run into transport problems, including being diddled with a gypsy wagon – which they end up pulling themselves after the horse collapses. But everything works out even better than Tansy imagined when they catch the attention of a television crew.

“The Sweet and Sour Rivals” starts. It is one of the more rare stories that features ethnicity, because it stars a Chinese girl. Also starting is “Holiday Hideaway”, about a family who hide in the house and pretend to be on holiday, just because Dad is too embarrassed to let the neighbours know they can’t afford the real thing after his business failed.