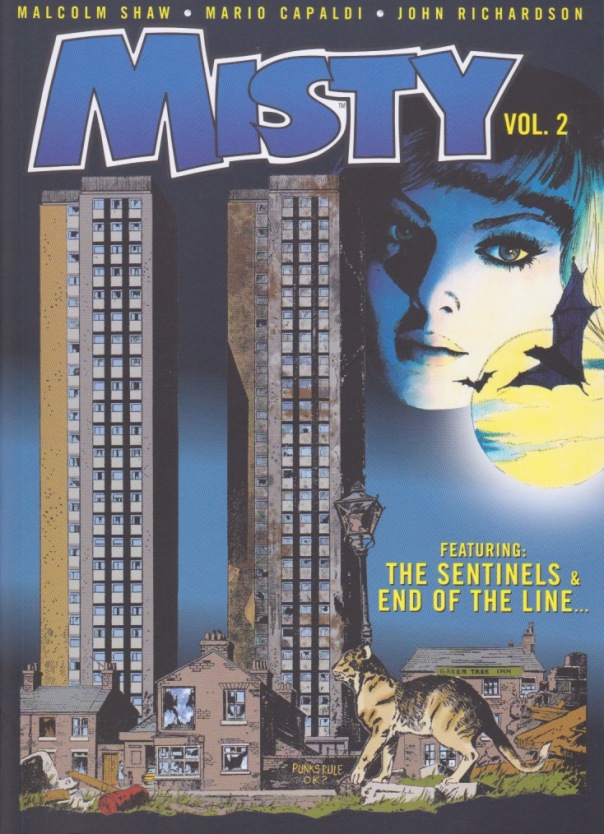 In 2016 Rebellion brought us the first of their Misty reprint volumes. It was generally well received although there were a few quibbles. Of course this could only mean the first volume left scope for even better volumes to follow.

The second volume certainly delivers on that front, right from the front cover. Rebellion have definitely put far more thought and design into the cover than they did for the first volume. The cover really conveys the spookiness of Misty with The Sentinels silhouetted against the night sky and Misty with her trademark, the bats flying across the full moon. The return of the original logo complements the urban sprawl that the Sentinels hint at.  Having the problem Sentinel itself in full colour further enhances the creepiness of the cover because we can see just how rundown and mouldy it looks.

Reprint quality is an improvement on the first volume. The powerful black-and-white inking on glossy paper rather than the old newsprint of the original really intensifies many scenes, such as the infamous Gestapo torture cell scene in The Sentinels. On the other hand, of the finer details of white outlines against black fill do look a bit lost and hard to distinguish because of the intensity of the black inking.

The reprint of The Sentinels was the drawing card for this volume, so it is little wonder that it was used for the cover. It feels like the other reprint, End of the Line, hardly gets a look-in, which seems a bit sad. But then, The Sentinels has always been one of Misty’s serials that sticks with people, while End of the Line is less remembered.

It is not surprising that The Sentinels is one of Misty’s most popular and well-remembered stories considering the topic it tackled was extremely daring and controversial for girls’ comic: what if Hitler had won World War II? To this day, The Sentinels is the only serial in girls’ comics to use that theme. Further adding to its publicity is the recent follow-up in the Scream & Misty Halloween Special, Return of the Sentinels. However, readers are strongly advised to read The Sentinels first or at least be familiar with it before reading the sequel. Otherwise they will be just as confused as the heroine at what she encounters when she ventures into the Sentinel.

In End of the Line we go from a creepy apartment block with an entrance into a nightmare world to a creepy railway line that has something similar, but in a different manner. Unlike the Sentinel, there is genuine evil at work out to take people away, plus there are glimpses of what happens to them once they are snatched – which are of course not pleasant to see.

End of the Line is one of Misty’s more underrated serials, but hopefully its reprint alongside The Sentinels will give it more attention. It has the distinction of being the only serial in girls’ comics (at least, the only one I have seen) to be drawn by John Richardson. Richardson was more often seen drawing complete stories, the Tammy Cover Girls from Tammy, and plenty of Wee Sue.

It is annoying that Richardson only got a couple of lines’ worth in the biographical section of the volume. Surely there must be far more information available on him somewhere?

This volume could be regarded as a tribute to Malcolm Shaw, as he wrote both these serials. As we read the biographies at the end of the volume, it is sad to read that his life and career were cut short just the day before his 38th birthday.

Towards the end is a reprint of “Your Face is Your Fortune”, which is a compilation of what various types of facial features (eye colour, face shape etc) say about your personality. It would have been all right for the original readership of 8+ year-olds, but might come across as condescending for adult people who are more likely to be reading the volume. How about a reprint or two of Misty’s text stories to break up the flow of the picture stories instead? It would be more to the point, and there are plenty of well-remembered classic Misty text stories, such as “The Doorway to Evil!” and “The Little White Dot”, that could be dusted off and given a whole new lease of life in the reprint volumes.

On the whole, Misty Volume 2 delivers on being a proud step up in the Misty reprint series. It definitely makes us even more excited about Misty Volume 3 and what it will bring us.