Aboard a warship at Gibraltar, senior British officers are holding a top secret meeting. They are unaware a German spy is taking photographs of them doing it, so Berlin is alerted to the Allies planning something there, but they don’t know the details. Commodore Henry Dorning is one of the privileged few to know the officers were discussing plans for Operation Torch, the upcoming Allied invasion of North Africa.

Dorning has two additional problems, both of which have direct bearing on the story. The first is his nephew Ralph, who is trapped in the Nazi-occupied Channel Islands. The second is just being diagnosed with a heart murmur. Unfortunately the doctor cannot determine the severity of the murmur and advises a heart specialist. But there is no heart specialist in Gibraltar available for Dorning to consult.

While Dorning is being flown home aboard a Mosquito a German plane shoots it down. Dorning manages to bail out, but unfortunately he unwittingly parachutes into the Channel Islands. By the time he realises this, he has been captured by German naval officers.

The shock turns Dorning’s heart murmur into a full-scale heart attack. His condition is so serious that the usual Gestapo interrogation methods are out of the question, much to the chagrin of Gestapo rep Joachim Stoltz. After exchanging notes with Berlin, Stoltz knows Dorning is carrying vital information about what was discussed aboard that warship, but has to find another way of getting it out of Dorning. Then, while sifting through Dorning’s belongings, Stoltz finds out about Ralph. Immediately he hits on the idea of using Ralph as a hostage to blackmail Dorning into giving the information.

Meanwhile, Ralph has been using his catapult to help Dimitri Solkhov, a Russian prisoner, escape Nazi slavery. The Nazis give Dimitri up for dead after he goes over a cliff, but arrest Ralph for helping him. Ralph is sentenced to death, but is rescued from the firing squad in the nick of time by Stoltz’s order to turn Ralph over to his custody.

Elsewhere, Dimitri survived long enough to be rescued by Flyn MacCreedy. Flyn is wheelchair-bound after being wounded in action, but despite this he is as strong as a bull. Flyn has managed to hide a boat, “Beauty”, from the Nazis. Unfortunately Beauty has no fuel and Flyn, being paraplegic, can’t go out and steal any from the Nazis. Dimitri enthusiastically offers to do the job.

Flyn directs Dimitri to a local airstrip as the best place to steal fuel. Dimitri is aided by the fact that the guards have grown slack with security because they find the Channel Islands Occupation one great big bore. (Even for Stoltz, it was Dullsville before Dorning came along!) 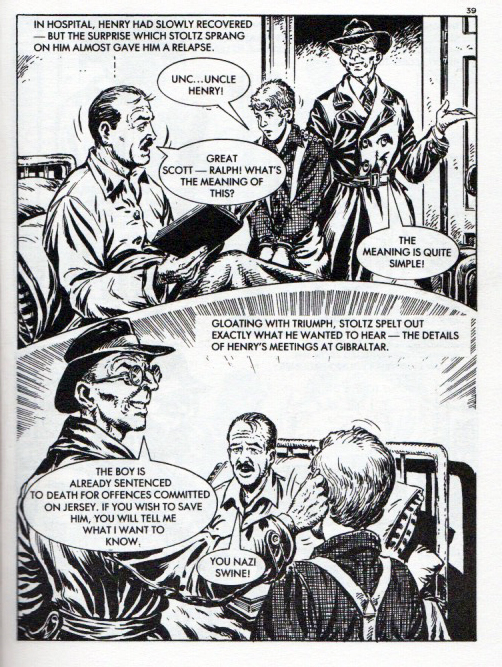 After loading several stolen loads of fuel for Beauty, Dimitri sees Ralph being flown in to be delivered to Stoltz. Dimitri immediately recognises the boy who helped him escape and naturally wants to help him. Fortunately one of the escort guards stays behind because his just-about-had-it motorbike is acting up. Dimitri clobbers the guard and takes his uniform and motorbike.

At the hospital, Stoltz shows Dorning he has Ralph in his clutches. He informs him of the death sentence that hangs over Ralph and how it will be carried out if Dorning does not tell him what he wants to know by next morning.

But as Stoltz and Ralph come out of the hospital, Dimitri catches up. He bowls down the Gestapo and tells Ralph to get on. It’s then a matter of fleeing through town while keeping ahead of the Gestapo with a double load and a sub-standard motorbike. They make it back to Flyn’s, but don’t realise the defective motorbike has left an oil trail, which the Nazis soon find.

After comparing notes they realise the Gestapo is trying to force vital information out of Dorning. As they can’t make their escape until dark anyway, they fill in time by hatching a plan to rescue Dorning. Ralph and Flyn put together their combined knowledge of the hospital for Dimitri and Ralph to get into Dorning’s ward and rescue him (they are further helped by carelessness from yet another bored guard).

Meanwhile, the oil trail has led Stoltz straight to Flyn. Despite his wheelchair, Flyn puts up quite a fight, including breaking Stoltz’s wrist. He then sends himself over the cliff, and Stoltz assumes he’s dead. In fact, Flyn had swum his way to Beauty.

However, Stoltz guesses what Ralph and Dimitri are up to. He arrives at the hospital just as they are about to make their getaway with Dorning in an ambulance. They put up enough fight to stall Stoltz and get in the ambulance. They head back to the wharf where Flyn and Beauty are waiting, but Stoltz is right behind.

Stoltz commandeers the whole German flotilla on the island to go after the fugitives. The naval commander is furious at this because Stoltz is non-military, but knows it is no use protesting. Knowing the fugitives are heading north, Stoltz has the flotilla drive them west, where they will run out of fuel and be sitting ducks for recapture.

After being informed what the date is, Dorning persuades Flyn to play into their hands and do exactly what they want. When Beauty does run out of fuel in the western approaches it looks like Stoltz has won – but then he runs right smack into the first wave of Operation Torch crossing the Channel. Of course this was Dorning’s plan all along. The German flotilla disappears into the mist. Stoltz’s vessel turns the wrong way and gets dashed to bits against the approaching convoys. The convoys rescue the fugitives. They don’t yet know the fugitives saved them from “a hot reception” at the hands of the Germans (though it’s not clear on whether it was because they actually diverted the German flotilla at a critical moment or stopped Stoltz from forcing Operation Torch out of Dorning).

One of the most striking things is how the artwork makes Stoltz the star of the show in every panel he appears. In his first panel he looks like a dapper old man that could be taken for a clerk. But as his character develops he looks more like a weasel while the artwork still gives his face a dash of humour. And then there are brilliant panels where he looks truly sinister, such as where he stares down at where Flyn went over the cliff.

The Channel Islands occupation holds a particular horror about Nazi rule because it was the only British territory occupied by the Nazis and therefore a microcosm of what would have been if Hitler had conquered Britain. We certainly see horrors in the slave labour of the Russians and the Ralph, the meagre rations the islanders get, and Ralph, a mere boy, almost getting executed by firing squad.

Yet there is humour too, in the way the Germans are so bored stiff with an unexciting occupation that they have grown sloppy in their security. This has the bonus in that it is so easy to take advantage of. And so we get to see some of the resistance activity on the island. It begins with Ralph and then Flyn who by turns help Dimitri to escape. Both Ralph and Flyn show real courage in the face of their physical deficiencies against the Germans (Ralph being so young still and Flyn being wheelchair-bound). These acts of resistance turn into full-scale action when Dimitri rescues Ralph and then all three set out to rescue Dorning. The motorcycle and ambulance chases are real highlights. They would look really exciting on a movie screen, perhaps even more so than a battle scene. Putting the motorcycle chase on the cover is a master stroke. It immediately catches the reader’s eye and the angry German in the background is a hoot.

The action scenes make a nice change from the battlefield scenes that appear in so many Commandos. In fact there are no battlefield scenes at all until where the flight on Beauty ends up. The escape on Beauty is not just a mere chase; Dorning actually turns it into part of Operation Torch itself and helping the operation to succeed. It is also turned into an ironic punishment for Stoltz where Dorning actually gives him what he wants to know – Operation Torch – but in a manner that causes Stoltz’s downfall.