We are now well and truly into the run of Princess II where she is falling back on reprints from Tammy and Jinty. From Jinty we have “Horse from the Sea” and “Stefa’s Heart of Stone”. Many former Jinty readers would have envied Princess readers for getting a reprint of Stefa. Jinty’s letter page indicated there was a popular demand for this serial to be repeated, but for some reason neither Jinty nor the Tammy & Jinty merger obliged. From Tammy we get “Rowena of the Doves” and now “The Dream House”.

Nonetheless, Princess is still producing her own stories. One is the cover story, “Flight from the Romanys” (not good grammar there). Lydia Parks is kidnapped by nasty gypsies, for no other reason than to make a slave out of her and profit from the chattels she had on her (rich clothes, a horse). Considering her father is a wealthy lord, they could have shown more imagination than that! This episode is dedicated to establishing just how cruel Lydia’s kidnappers intend to be to her, and Lydia showing us her resolve to escape despite her tears or the gypsies’ attempts to discourage her.

A more savoury gypsy gives “The Runaway Clown” both hope (her father will find her and no going back to the home she ran away from) and fear (danger from an elephant) when she looks into her crystal ball. Of course the fortune teller means Princess, the vicious elephant trainer who has been gunning for Cindy. This time Princess gets caught out and sacked, but has Cindy really seen the last of that nasty piece of work? Time will tell. Meanwhile, the weather presents its own dangers, and it leads to the death of the fortune teller.

Spoiled Laura is showing improvement in the “Lyon’s Den”. But is it genuine, or is it because she hopes to get a shopping trip in Paris out of it? Mrs Lyon suspects the latter, but readers are left wondering if the former is coming into it. Later, Mrs Lyon is surprised to see Laura on television donating her prize pony to the children of the blind home and promptly phones Laura’s aunt as she smells a rat. Is she right?

Two Princess stories, “Sheena and the Treetoppers” and “The Saddest Dog in Town”, reach their penultimate episodes. The Treetoppers are trying to find a missing will that would save their treehouse, but no luck. And now the demolition men are asking the councillor whether or not they have the green light to demolish the old house and the treehouse with it.

Lucy and Martin Denton are not having much luck tracing the owner of the “Saddest Dog in Town” either and turn to the local newspaper for help. Then a lorry passes by and the dog runs after it because he has recognised the engine sound. His rightful owner at last?

Sadie, Cook and Grovel all jump on the table in fright when they see mice on the bench, not realising they are only sugar mice intended as a gift for them. They not only end up feeling very silly but lose their treat as well, because the cat ate the mice. 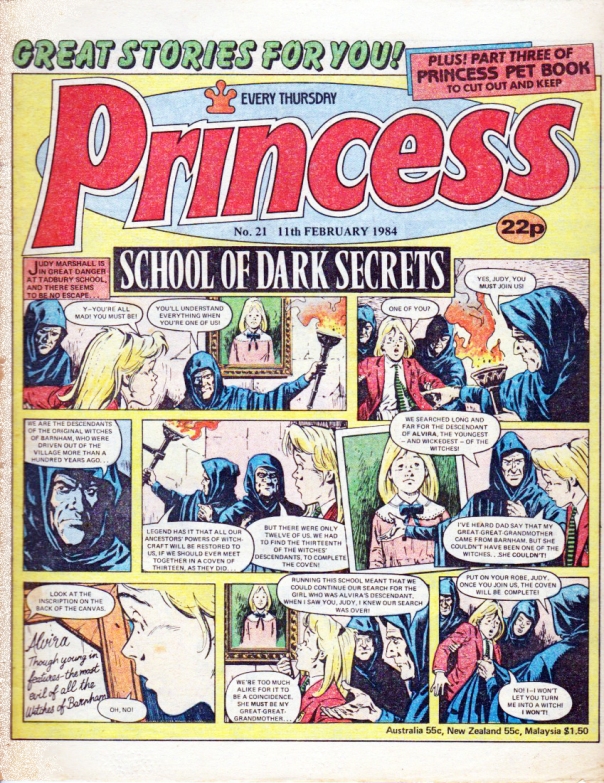 This is Princess II’s one and only Valentine issue. Valentine’s Day is just around the corner, which gives it topical flavour. Only Sadie in Waiting actually commemorates Valentine’s Day (below), and we get a hint that Grovel has a softer side, though of course he won’t admit it.

“School of Dark Secrets” reveals its secret. The staff are descended from the Witches of Barnham. All they need to complete the coven and receive the powers of the original witches is Judy, the descendant of Alvira, the 13th witch in the portrait. Too bad for the witches they failed to spot the clue that the portrait of Alvira had been painted over with that of Judy’s great-great-grandmother, so they grabbed the wrong descendant. Now did someone paint the portrait over to fool the witches or because they couldn’t stand the sight of Alvira’s ugly mug? At any rate, the school is closed down and then reopened with more wholesome staff.

Laura is way too much for Mrs Lyon this week – she actually throws a huge, creamy cake in the woman’s face! She’s still serving in the restaurant though.

Stefa starts on the path to turn her heart into stone to avoid feeling grief again. Everyone is upset by the change in her but don’t realise why. The doctor advises a complete change. A fat lot of good that’s going to do.

Princess, the elephant performer, is so jealous of “The Runaway Clown” that she sets a tiger on her. This backfires big time on Princess, and it looks like it’s about to lead to the Big Top going up in flames as well.

The Treetoppers fend off an escaped lion, but their treehouse is still facing the bulldozers. Then Sheena has a brainwave – but what is it?

The origin of the “Horse from the Sea” is revealed this week. Legend says a Penrose married the daughter of the King of the Sea, and she came up from the sea on the horse. Ever since then the horse has appeared whenever the heir of Penrose is in danger, which apparently is what is happening now.

Rowena’s father, King Guthlac, has sent her to summon her three brothers to his aid. One brother has already refused, as has the second this week, because he’s in the power of a vampire. It’s all down to the third now.

In “The Saddest Dog in Town”, a clue emerges as to who the dog’s lost owner is. He is linked to Jess, a girl who wanted to learn ballet, but her parents couldn’t afford it. But where is Jess?

This is where Princess switches to the Tammy format (same newsprint, style and page count) and starts printing reprints from Tammy and Jinty. A new comic using reprints is not a good sign. It is an indication of an ailing comic and cutting costs, or perhaps even that the decision had already been made to merge Princess with Tammy.

The reprints are “Stefa’s Heart of Stone”, “Horse from the Sea” (Jinty) and “Rowena of the Doves” (Tammy). Later another reprint, “The Dream House” from Tammy, joins the lineup. Stefa was one of Jinty’s most popular stories. There was a huge demand to repeat her story in “Pam’s Poll“. Despite this, it was a repeat that did not eventuate in either the remainder of Jinty’s run or her merge into Tammy, but it finally did so in Princess and would continue in the Tammy merger.

However, there are also totally new stories. In “The Saddest Dog in Town” the Dentons take in Sammy, a dog who hitched a ride into town, but there is a real mystery as to why Sammy is so sad. It appears to be linked to his searching for something (or someone?) and disappointed to find it.

In “Laura in the Lyon’s Den!”, Aunt Leroy decides it’s time to get someone to sort out her spoiled and mischievous niece, Laura. That’s definitely a good idea, but is the approach – give Laura a holiday job in the family restaurant under the strict supervision of Mrs Lyon – going to work out? Mrs Lyon herself is not happy about such a burden, and Laura’s a real handful. Still, Laura could meet her match in Mrs Lyon as she definitely has what it takes to deal with a rotten brat.

In “The Runaway Clown” Cindy runs away from a children’s home where she always puts her foot in it. She is drawn to the circus, where she goes to the rescue of a tightrope walker in trouble although she’s never walked a tightrope before.

The Treetoppers’ treehouse is in danger. The site is going to be demolished to make way for a stadium. The Treetoppers decide they’re going to put up a fight. Meanwhile, Judy tries to get her father to take her away from the “School of Dark Secrets”, but Miss Grimkin is onto Judy and manages to pull the wool over Dad’s eyes.

Princess Bee goes away; Grovel takes advantage to open the place to guided tours, and passes himself off as a lord. He is in danger of being caught out when Princess Bee returns unexpectedly. Sadie graciously covers up for him – while still teaching him a lesson.