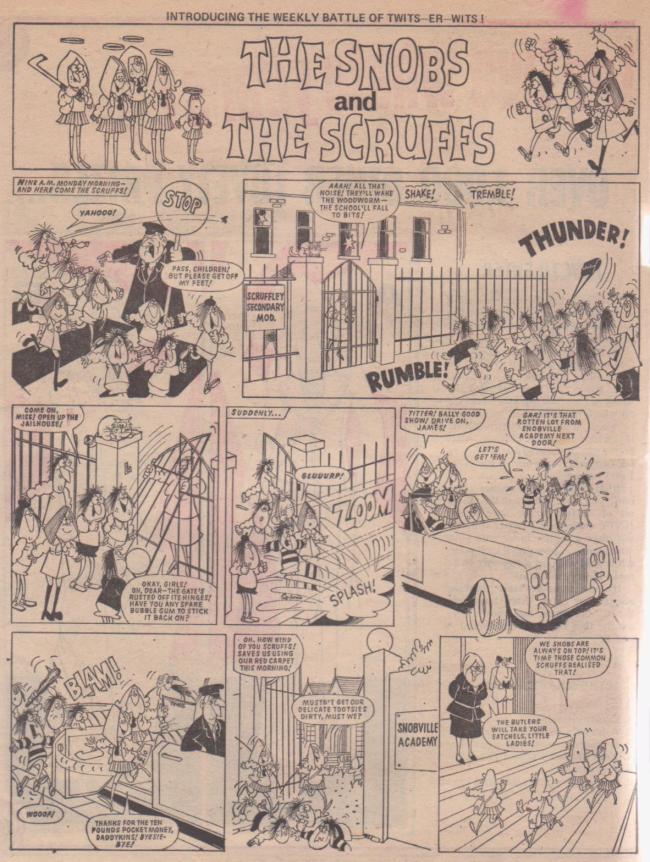 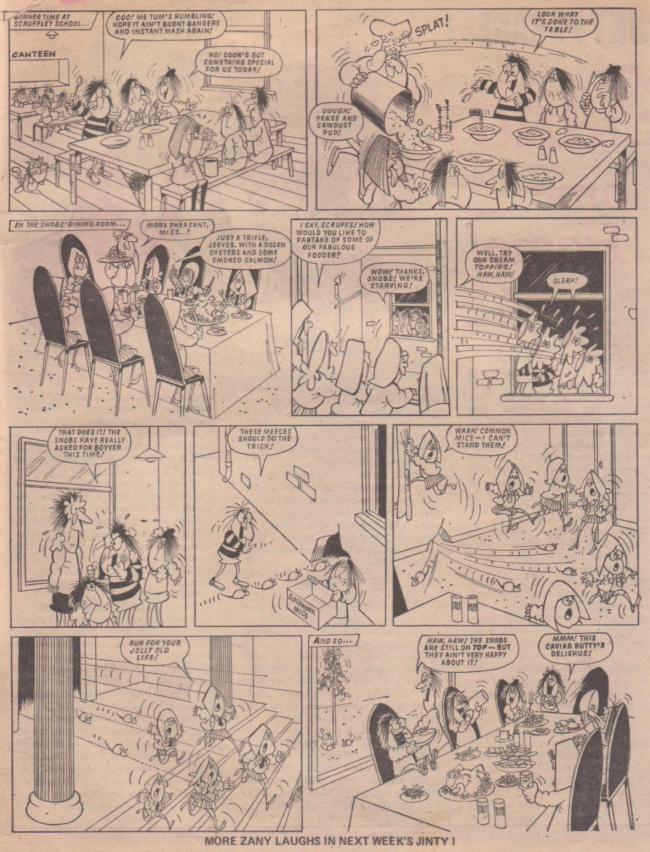 Every girls’ comic must have a funny regular cartoon, and “The Snobs and the Scruffs” was the first for Jinty, along with “Do-It-Yourself-Dot“. The title says it all – snobbery vs. commonality, in the form of the scruffs from Scruffley Secondary and their neighbours, the snobs from Snobville Academy next door. Each week the snobs try to score their superiority over those common scruffs next door: “We snobs are always on top! It’s time those common scruffs realised that!” But of course the scruffs always win in the end.

Snob vs. Scruff is a long tradition in comics, and an extremely popular one because you just love to see haughty snobs being taken down a peg. However, you see it more often in the funny comics, such as Ivor Lott and Tony Broke (Cor!!!! / Buster) or “Top of the Class” (Jackpot / Buster). The theme would continue in Jinty’s “Alley Cat”, with the streetwise Alley Cat vs. his perennial nemesis, Spotty Muchloot the rich snobby boy. Unlike the Scruffs, however, Alley Cat occasionally lost to Spotty. And it was not all Alley Cat vs. Spotty – Alley Cat would have other adventures such as catching fish or treasure hunting.

The characters in Alley Cat also had individuality and personality to make them even more engaging, which is not the case in this strip. The snobs and scruffs look pretty much the same – the snobs all looking like proper little ladies with shoulder length blond hair, and the scruffs with straight, even spiky dark hair (though not looking that scruffy). None of them have any given names and little individuality to make any of them stand out, as, say, “Top of the Class” did with its snobs and scruffs. They are flat characters, and with the strip focusing solely on weekly battles between the snobs and the scruffs, it would raise laughs, but perhaps not quite be the material for a classic funny strip. Indeed, it was short lived while Do-It-Yourself Dot proved the lasting cartoon.