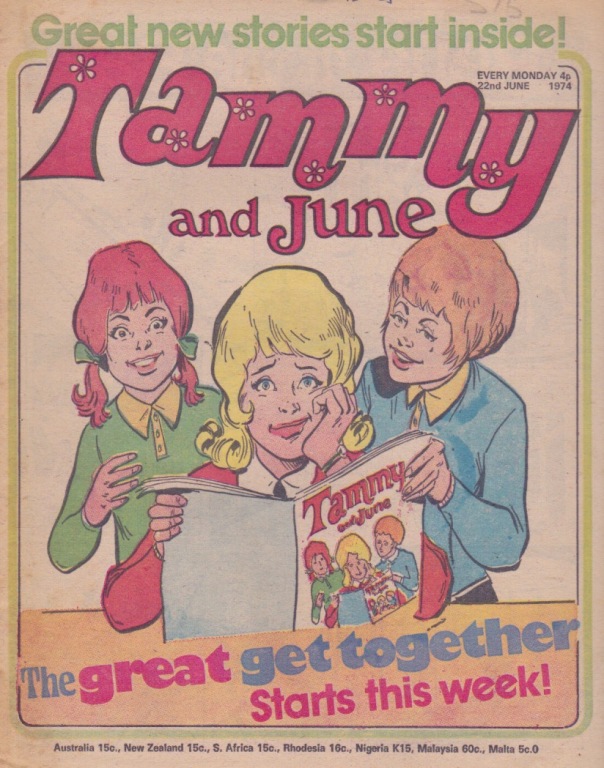 As we have a June theme running at present, I thought I may as well discuss the issue where June merges with Tammy. The title hails it as “a great get together” and I certainly agree. In this merger, everything starts either new or anew. This makes a nice change from the usual annoyance of a merger starting with stories from both comics that are still unfinished, which left new readers irritated to start reading stories half-way through.

What comes over from June – Bessie Bunter and the Storyteller – will last for many years in Tammy. In fact, Bessie and the Storyteller are going through their second merger; they originally came from School Friend, which merged with June. Many of the Strange Stories that appear in Tammy would later make their way into Jinty with Gypsy Rose replacing the Storyteller. Some of them even turned up in June annuals during the 1980s – talk about reciprocation. Their appearance in Tammy also gave her more regulars in addition to Molly Mills and Wee Sue.

Molly Mills starts off with a great story that hooks you in immediately (well, it did me). Molly takes pity on Ada Fellows, a girl who seems to be bullied by her ex-employer and brings her to Stanton Hall for a job. Pickering the resident bully butler thinks Ada should be got rid of. And for once he has the right idea. Molly soon discovers Ada is big trouble – especially for her.

Sadly, Lucky’s Living Doll proved less durable. Although she had lasted for years in June, she did not make it to the merger. Maybe the editor decided her time was done or there was no room for her because Tammy was to retain Wee Sue and Uncle Meanie from the Sandie merger? If so, Wee Sue proved the most durable and would go through the most diverse range of artists before ending in 1982.

It would be nice to know which of the new serials were originally meant for June or Tammy; they could have appeared in either of them.

In “Eva’s Evil Eye”, Eva Lee pretends to have the evil eye to stop girls from bullying her because she is a gypsy. But what will the consequences be – especially if someone sees through Eva? “Sadie in the Sticks” belongs in the time-honoured tradition of an amnesiac girl being exploited by unscrupulous people who take advantage of her loss of memory. Sadie Wade’s only joy as she slaves in the Scraggs’ household and chippie is a talent for making matchstick models. Pretty odd considering she has a fear of fire. The start of the mystery that has to be unravelled if Sadie is to regain her memory and be free of the Scraggs. In “Swimmer Slave of Mrs Squall”, Sue Briggs is a difficult pupil at school who seems no good at anything or even try. Then, when she trespasses at the reclusive Mrs Squall’s house, her talent for swimming is discovered and Mrs Squall offers to train her as a champion. But the title warns us that her motives and methods are not all that noble.

And the best for last. The Tammy & June merger issue is a milestone in Tammy history for another reason – it marks the debut of Bella Barlow. She starts off as a serial here, “Bella at the Bar”. Like Sadie, Bella is a Cinderella story (minus the mystery). Her aunt and uncle make her do all the work, both at home and at their window-cleaning business. The only thing that makes her life worth living is gymnastics. Her talent is spotted, but her mean uncle won’t agree to training unless there’s money in it. Bella is determined to find a way, but of course there will be even more obstacles. However, this would not be just another Cinderella story. Popular demand would bring Bella back again and again until she held a joint record with Molly Mills for Tammy’s longest-running character – ten years. It is appropriate that Bella is the first serial we see as soon as we open the issue. Bella is also indicative of how topical gymnastics had become at the time with Olympic champions like Olga Korbut. Up until then there had been only one gymnastics story in Tammy – the 1972 story “Amanda Must Not Be Expelled”. But the popularity of Bella – not to mention the fluid, anatomical artwork of John Armstrong – would make gymnastics a regular feature in Tammy.

That’s it for my June contributions to this blog. My next entry will be back on topic with Jinty.