One of the other keynote talks that will be of particular interest to readers of this blog was the one by David Roach. If you have read his most recent book, “Masters of Spanish Comic Book Art“, then you would have found a lot of familiar material in his presentation, but we had the opportunity to hear him give the material in a lively talkative format and with the invaluable aid of some gorgeous pages of art and painting that David brought along. As with the Anne Digby talk, this has been recorded by Alex Fitch and hopefully will be broadcast on his internet radio show in due course. For now though, some notes, impressions, and key points I took away from it. (I am not, however, going to go into individual comics artists,: you need to look at the book or attend another of David’s talks in order to do that, I can’t do them justice here.) 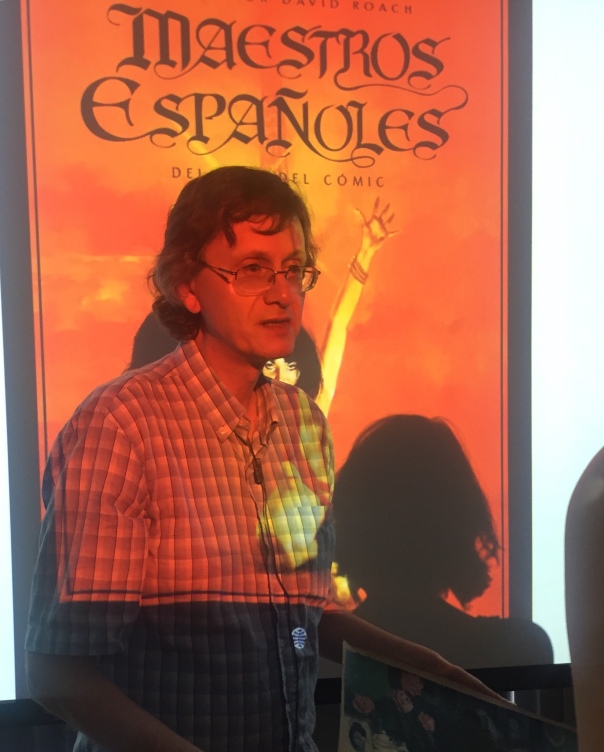 David took us through the period from the 1950s to the  1970s, explaining how there came to be such a large number of Spanish artists working outside of their own country (in the UK but also in the US and in other European countries). He explained that after paper rationing came to an end in Britain, there was a tremendous demand for comics, magazines, and story papers. (We’d already heard in the Anne Digby talk the fact that School Friend in its heyday was selling 1 million copies a week, and David repeated this figure in his talk too.) There were just not enough British artists to keep up with the demand – the pre-war artists were getting older and literally dying out, the younger generation had gone off to the war and been injured or killed, and when the Amalgamated Press advertised for artists to join their stable, they only got two responses! So when European agencies started to knock at the doors of British publishers, they were very welcome. Not all of the agencies were Spanish – the Belgian agency A.L.I in 1954 started the flood, and Italian agencies Cosmopolitan  and D’Ami were likewise two of the early strong contenders.

However, the Spanish agencies  such as Selecciones Illustradas (S.I.) run by Josép Toutain, and Bardon (co-run by Barry Coker), and the Bruguera studio associated with the A.L.I. mentioned above, ended by dominating the scene to such an extent that it it is thought that at least 385 Spanish artists worked in the UK – more than there were British artists working in the same market during that time period!

In addition to touching on more well-known grounds (showing how much fantastic work the Spanish artists did, by displaying beautiful work in a range of styles, and explaining how editors conceived of certain groups of artists as matching certain kinds of work (Argentinian artists = muscular war artists, Spanish artists = romantic dreamers suited to girls and romance comics)), David also highlighted some unexpected aspects of the Spanish comics boom that I hadn’t previously been aware of. One of these was that the Spanish artists experienced this work not only as financially rewarding (the pay rate was hugely much better than they were getting in Spain, and the exchange rate was in their favour too) but also politically and socially rewarding too. These were young men whose work meant they got the chance to travel outside of Francoist Spain, and who additionally got sent reference material from the UK, so that they heard about the Beatles and suchlike popular culture icons before anyone else in Spain did. Indeed, they were some number of years ahead of the curve! Lest you think it was all one-way though, David was at pains to point out that images like the Serenade cover above is pop art avant la lettre – it was drawn some years before the Swinging 60s that you would assume it was representing, and so you can only think of it as more in the nature of an inspiration for the look of that time then a representation of what was already happening. Spanish-drawn romance comics as an inspiration for pop art and the Carnaby Street look? Stranger things have happened…

The other surprising aspect that David mentioned was that there was much more awareness of, and renegotiating of, copyright than I’d supposed. The British comics normally didn’t print credits, and although in the Spanish market it was usual to sign the artwork this might be done using a pseudonym or a variant of the artist’s legal name, and this might vary over the years of an artist’s career. It was not unusual for a proper identification of the original creator to be far from easy to establish (especially if they did most of their work in the British market and hence were not credited). In the British market, also, it was vanishingly unusual for creators to own their own material – the standard procedure for Fleetway, and I believe for D C Thomson too, was to cast the payment cheque in the form of a contract which assigned all rights to the publisher in perpetuity, so that in order to get paid there was no other option than signing away your rights. But David brought out some examples of painted artwork that was painted ‘on spec’ by artists – both war scenes and pensive domestic scenes – which were sold on a ‘first print rights’ basis, so that the publisher was only granted the rights to to use that material once. They were then able to re-sell the material if they could find a market. David had one example, a painting of a woman in a bedroom, which was sold to several places: women’s magazines in different countries, a romance comic, and to be the cover of a mass market paperback. No wonder the Spanish artists had a tradition of tending to go into fine art after some 10 – 15 years as a comics artist – it feels like a natural move, given the above. 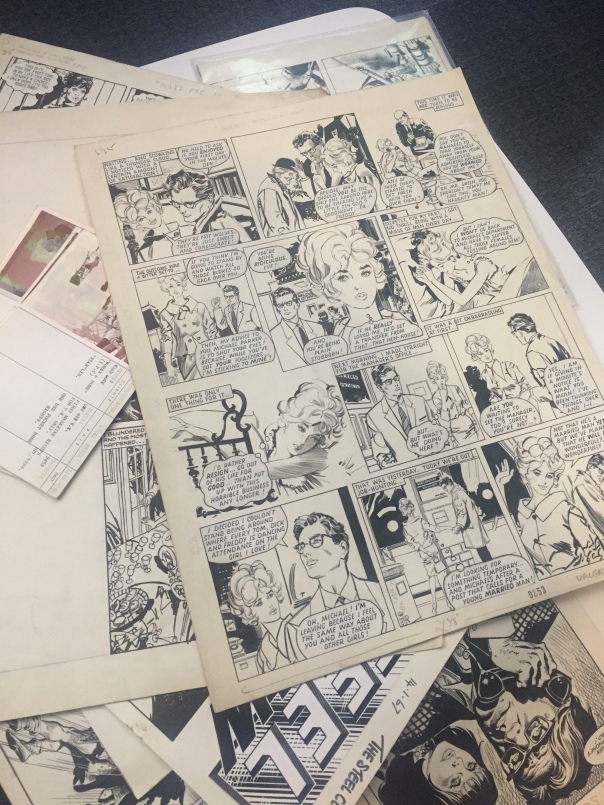 The talk attendees were, I think, blown away by the range of art shown, but they also had pertinent questions to follow up with. Some of them were a bit unanswerable – how did the Spanish artists manage to produce so much output, and how did they come to be so very good at such a young age? Others touched on the political situation and drew out further aspects of what David had said about the political freedom that working for a foreign publisher gave – many of the artists became or already were Marxists, radical leftists, and subversives of one sort or another (at least one of whom had to flee the country at short notice). Finally, I know that there was a real rush at the end of the talk to come and look at the artifacts that he had brought along – a number of original pages of art (above) painted images, and even one of the portfolio samples that the agencies carried from publisher to publisher to entice them to sign up a new artist.

There was of course much more in the talk that is beyond what I can go into in a blog post here. Do seek out David’s book (linked to above), listen to Alex Fitch’s broadcast of the talk as and when it comes out, or take the opportunity to see him talk on this subject if you ever get a chance.