Shirley Bellwood, who died in January 2016 aged 84, is probably particularly familiar to most readers of this blog as the key Misty artist, creator of the beautiful cover and interior images of the mysterious dweller in the Cavern of Dreams. However, as this very informative piece on Down the Tubes explains, she had a long artistic career from well before Misty was published, starting in the 1950s.

In the pages of Jinty, she was most usually seen as the illustrator of text stories in Specials and Annuals. There were one or two comics stories drawn by her but these were reprinted from earlier titles. 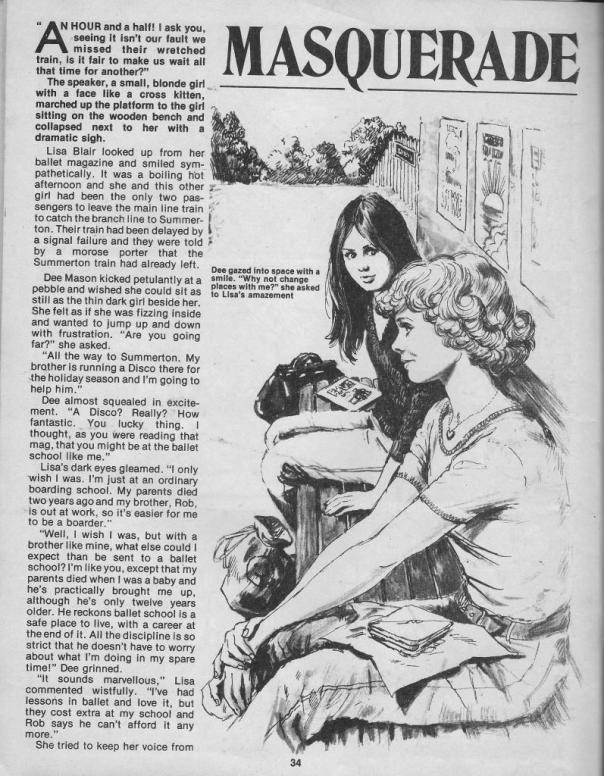 Douglas Perry is an artist whose style will be recognized by most readers of girls comics as he has had a very prolific history of drawing for IPC/Fleetway and for DC Thomsons across many decades. I think of him as a Jinty artist because he drew two particularly striking serials for this title, and a number of Gypsy Rose stories too. In fact, however, the bulk of his artistic output was clearly done for other titles, particularly IPC’s Tammy and DCT’s Bunty.

As my particular memories of Douglas Perry are from his spooky stories in Jinty, I want to illustrate this post with some pages from 1978’s “Shadow on the Fen“; they show his distinctive style (loose but effective) well, and give a chance to shiver at the creepy atmosphere he brings to life. 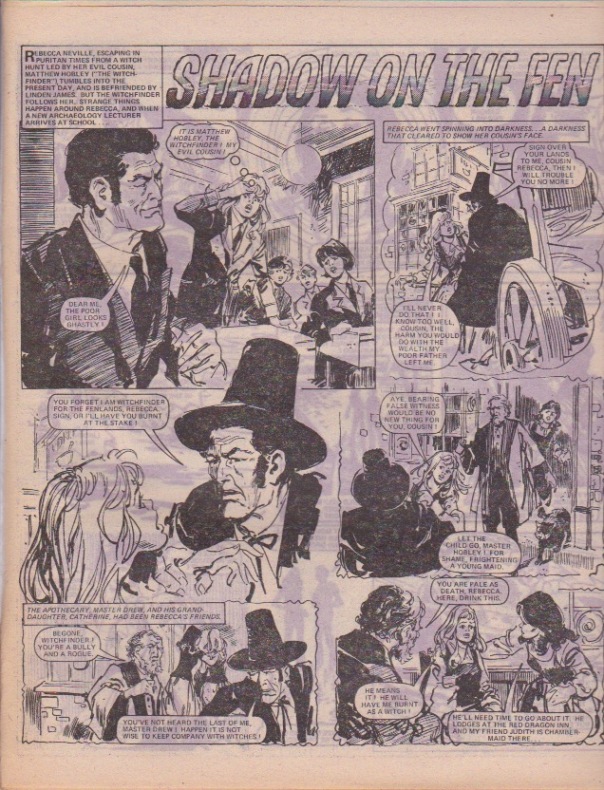 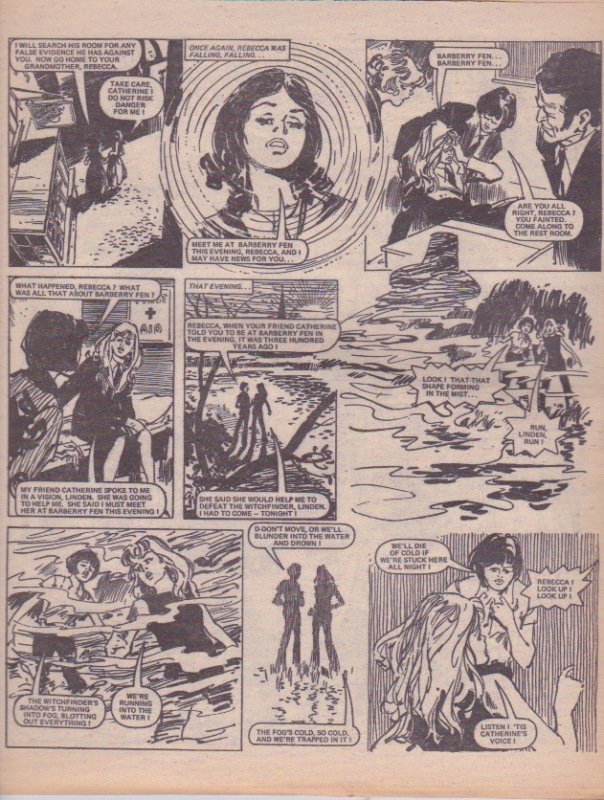 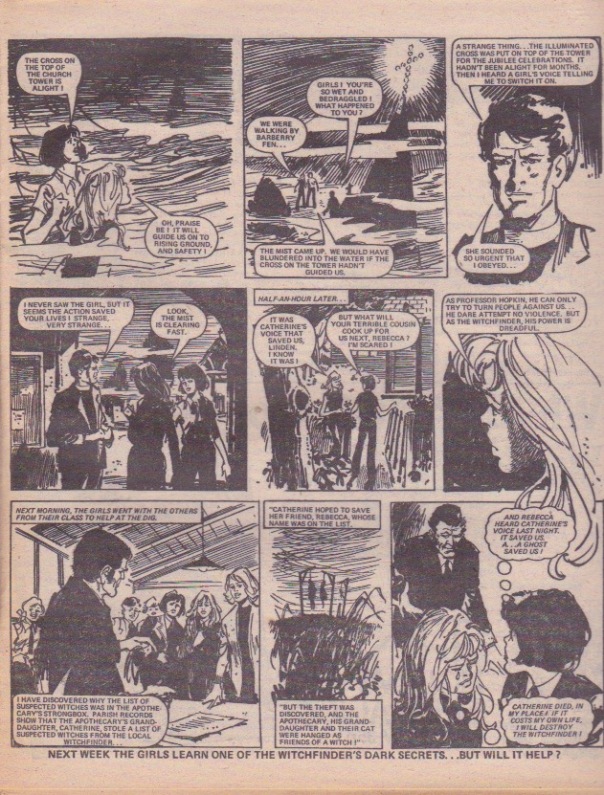 You can see from the above that Perry’s art has a lot of movement and energy in it, with some lovely touches in the composition, like Rebecca’s hair breaking the boundaries of the panel in the last page.

See also this discussion thread about him on the Comics UK Forum, which includes some example art uploads. The Girls Comics of Yesterday site, which focuses on DC Thomson titles, also has a Douglas Perry tag. Here is a Catawiki tag list too.

I am sad and surprised to see how little information there is available about this fine artist on the internet. There is nothing on Bear Alley, or the UK Comics Wikia entry, nor even anything on Lambiek’s Comiclopedia. I suppose we must count ourselves lucky that Perry drew for Tammy during the years they were running credits.

As ever, further information (particularly in order to add to the Bibliography) would be extremely welcome.

Edited to add: Mistyfan has sent through scans of the Misty story that Perry drew: “The Chase”. It is a great spooky tale and I include it here to show more of his artwork. 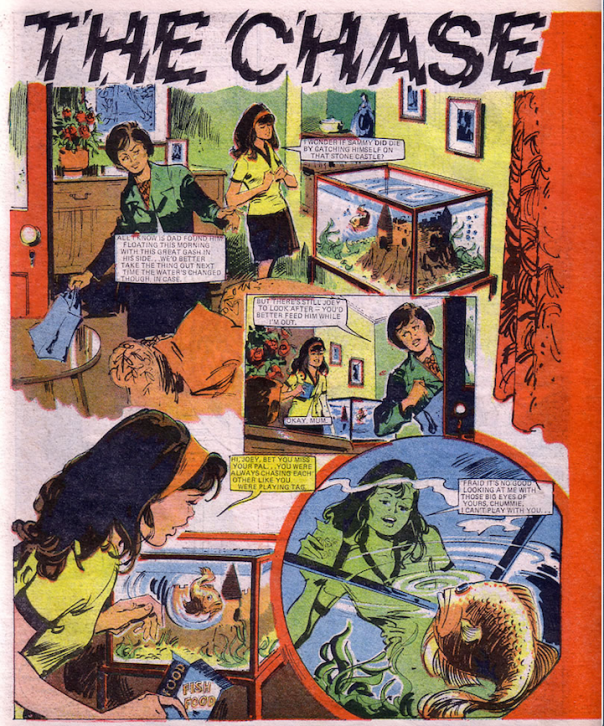 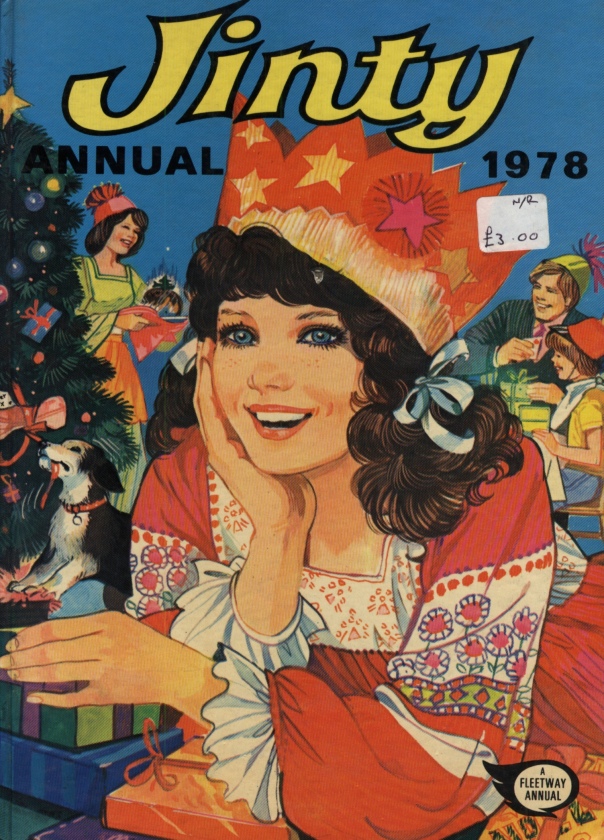 Now this is a proper Jinty annual! It has lots of recognizably Jinty artists (Jim Baikie, Trini Tinturé, Ana Rodriguez, Terry Aspin), plenty of good solid stories, and a nice long complete story that has intrigue, sports, and dramatic cruelty. Oh wait, that last bit makes it sound like Tammy too!

“House of Secrets” is a straightforward-enough ghost story with a happy ending; Ken Houghton’s art seems a little on the stiff side here, but overall the story works well. Text story “For Love of Smudge”, illustrated by Terry Aspin and written by Linda O’Byrne, is a read that gives more back; the plot of fed-up mother manipulated by a so-called friend, all of which impacts badly on the girl protagonist and her dog Smudge, raises it from being a straight-forward animal story. 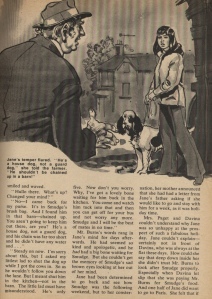 The Dora Dogsbody story is here drawn by Jim Baikie; it’s nice to see a Jinty regular even when drawn by an unexpected artist (if also a Jinty regular himself). Baikie does a good job but I can’t help feeling that his Ma Siddons, in particular, ends up rather more hag-like than when drawn by the more slapstick Casanovas. 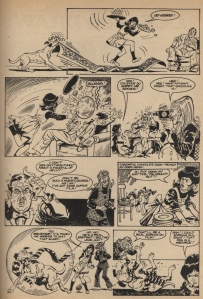 “Shelagh’s Shadow” is the long story, presumably reprinted from June. I guess that when that title ended, John Armstrong moved in directions that did not primarily include Jinty – he was featured in Tammy, of course, and I suppose that might have taken up a lot of his time until he was perhaps brought over to Misty by Pat Mills. This story has great swimming and diving sequences, and the strong depiction of facial expression that Armstrong is particularly good at, so it must have been right up his street. Ann Brent is the mysterious girl who shadows swimming champ Shelagh; Ann is under the thumb of her frightening guardian and swimming coach and multiple layers of deception need to be unravelled before the end.

Mistyfan has posted about the 1982 annual which includes a good dose of Gypsy Rose stories; Gypsy Rose had just about started in Jinty by now but perhaps was not solidly enough established to feature in the annual? For whatever reason, all the strange storyteller spooky tales in this annual were ‘Uncle Pete’ reprints. The second to last of the stories reprinted has a signature showing it is by Alberto Salinas, a beautiful Spanish artist. 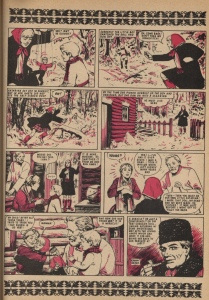 There are two outings for the artist I think is the “Concrete Surfer” unknown artist – the first in the complete short story “Black Friday” (thrilling adventures with wildlife and the wild outdoors). This is competent but looks like an early outing for this artist as a comics artist. The text story “Naomi’s Moment of Truth” has rather more polished artwork which works well; the story is one of broken friendship and lesson-learning, quite realistic actually.

I don’t have the 1982 Annual that Mistyfan acclaims as possibly the best of the Jinty annuals; nevertheless, this is a great one well worth looking out for. 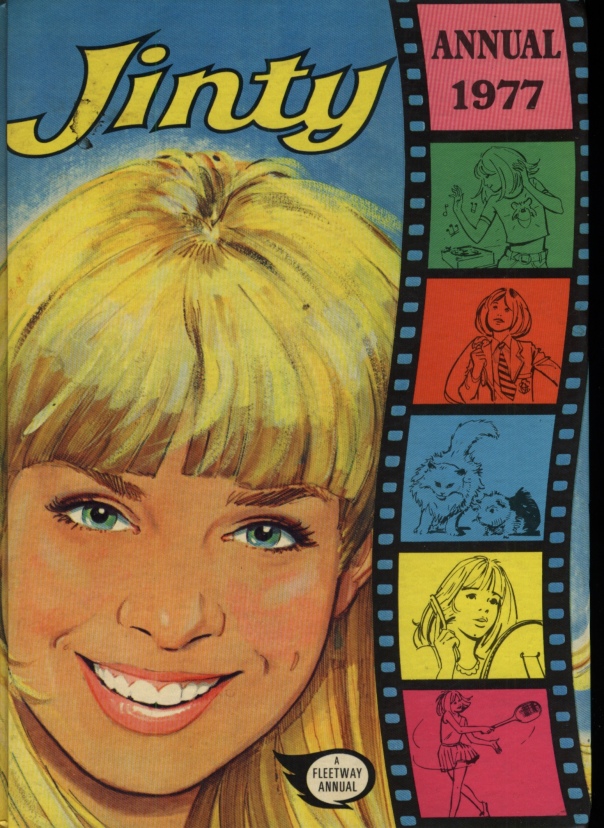 Stories in this annual:

This doesn’t strike me as the strongest annual I’ve ever read, though some of that feeling may be down to the lack of many of the usual strong Jinty artists. There are a good number of strange stories, which I always like, and some solid text stories, but nothing very outstanding in any of it.

The first story, about a mystical plant that will bring happiness to the finder, has a desperate girl who wants to find it so as to make her mother well, and a rival bitchy girl who only wants to enrich herself. Of course the good end happily and the bad unhappily – but I do wonder what illness the girl’s mother could have that ‘only an expensive operation could cure’ that she wouldn’t be able to get on the NHS? It sounds rather like plot taken from the heyday of girls school stories rather than a 1970s story.

Other readers may well be more interested than me to read “Jill In The Dark”, illustrated by Carlos Freixas who I know has many fans. I like his work in other stories, and it is very nicely done, but there is a preponderance of melodrama both in the plot (girl runner finds herself going blind at unpredictable points, has to struggle in the absence of friends and family) and in the art (lots of shots of the eponymous Jill staring in panic as she struck by sudden blindness).

There are at least a couple of good solid Jinty standbys in the shape of “Dora Dogsbody” and “The Jinx from St Jonah’s”. Dora sees household hijinks as Mrs and Mr Siddons dress up for a fancy dress ball as Dick Whittington and a cat respectively – including Mr Siddons being ordered by his missus to  get onto the floor and miaouw at the cheeky mouse who has frightened her! In the end Dora gets to go to the ball and Mrs and Mr stay at home, nursing nasty colds. And in Katy Jinks’s story, of course she is the one causing the upsets and shenanigans, if inadvertently as ever. There are lots of trips and spills, and much outrage is caused, only to end happily for all. They are both nicely-judged stories with a light touch and a feel-good factor.

As ever there are also various quizzes and articles about possible careers for the reader when she grows up, and things to make and do. I include a scan of one of the quizzes below because it is illustrated by an artist I am particularly fond of, who I would like to know more about. Does anyone know the name of this artist at all?