Scream hits its 13th issue, which is a celebration for a comic like that, and that is precisely what Scream does. On the cover, The Thirteenth Floor (what else?) kicks off the theme of 13 and unlucky for some. In the story itself, Mr Bullock the callous housing official is subjected to a shark-infested ocean and being attacked by giant crabs on a desert island until he agrees to give five-star treatment to the family he treated so badly.

The Ghastly Tale also has an “unlucky for some” theme, with a boy showing the yearly pictures of his birthdays. They progressively show his life going on a downward spiral that includes falling strangely ill and being put in a top secret MOD establishment, until he hits his nadir with – you guessed it – his 13th birthday photograph shows what he has become by then. There are no photographs of his 14th birthday.

Dracula’s a bit unlucky as well, you might say. Having a vampire hunter on his tail is giving him horrible nightmares of his previous experiences with vampire hunters, which range from torch-wielding lynch mobs attacking his castle to a professional vampire hunter, Alexander Quinn.

In this episode of “The Nightcomers” Raven’s Meet is really throwing everything but the kitchen sink at Rogans to destroy them. The Rogans dodge everything but clonks on the head from Simon Cutler. He’s taken them prisoner and he intends to sacrifice them to Raven’s Meet. At least it sounds like they’re going to hear the full story now.

The Library of Death does something new – a two-part story. It’s about a giant sea beast that emerges from the depths of the ocean and lands on the beach – and boy, is it a whopper! Eat your heart out, Jaws! Of course it’s scaring the hell out of everyone. The sea beast was probably inspired by “The Horror of Party Beach” as it was created from radioactive waste dumped in the ocean.

In the final episode of “The Escape” from Tales of the Grave, Barry White thinks he has gotten away with murder (which becomes double murder in this episode) and his booty by stowing away in a coffin that is sailing away to America. But he finds out too late that the coffin was intended for a burial at sea! Well, there’s his execution.

Unlucky for some, they say, but in this week’s episode of “Monster”, Uncle Terry and Ken turn out to be lucky – for a while, anyway. They finally met a more friendly person, a lady named Mrs McCrone who is not fazed by Uncle Terry’s appearance. Mind you, that’s because she’s blind. Mrs McCrone wants to turn them over because she says Uncle Terry needs help. But when Ken insists, she gives them a motorbike to help them along. But then they bump right into the police! Luck’s run out again.

It’s Friday the 13th (did you know there is a Friday 13th in a month that begins on a Sunday?). So this issue of Tammy is being profiled to commemorate. It’s not just because the theme on the cover – Dracula vs Tammy – should make it a Halloween issue but isn’t. It’s also because the number 13 is the theme of this issue’s Strange Story, which appears below. Could the mysterious 13th floor in the story have been one inspiration for “The Thirteenth Floor” in Scream!, perhaps? It is a bit like how Scream’s 13th floor works in the way it teaches arrogant Annette a lesson. All that’s missing is Max the computer. Oh well, judge for yourself. It sure looks like Bella Barlow’s Aunt Gert was the inspiration for the workhouse matron anyway. 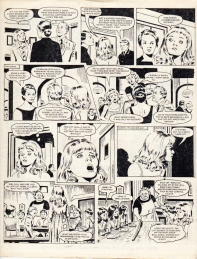 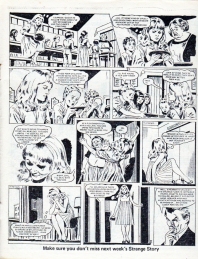 There is no Bella yet. Instead, the first story is part two of “Nurse Grudge”. It was extremely rare for Tammy to have a nursing story (the same went for Jinty). It’s also a revenge story, where Greta Jones starts as a student nurse at her dad’s old hospital to get revenge on the staff who got him dismissed 20 years ago. His old notebook is full of the details of their turning against him – but no details at all on why they turned against him or just what he was dismissed for. Now why did he leave that part out of his journal? Greta has noticed the omission but not looked into it at all before starting her vendetta against the hospital – and perhaps she should have done…?

Tammy’s adaptation of “The Moon Stallion” TV series ends this week. Next week is “The Outcast of Oakbridge”.

Bessie sneaks into town after Miss Stackpole, who is going to a dance. Hijinks ensue with Miss Stackpole and Bessie ending up in the same farmer’s truck and then having to use an old raincoat and sacking against pouring rain while trudging into town. Miss Stackpole finds she has missed the dance because she got her dates muddled, but the raincoat wins her first prize at a tramps’ ball instead.

It’s a real turnabout for Molly Mills in her new story, but it’s one she could well do without. Lady Stanton turns against Molly when a painter prefers to paint Molly than her. Then Molly is very surprised to find her arch-enemy Pickering suddenly coming over to her side and being supportive against Lady Stanton’s jealousy. Now he couldn’t possibly be doing that unless there’s something in it for him – but what? Is he hoping for a group portrait with Molly or something?

From the moment Stephanie “Steve” Sutton has arrived at her father’s archaeological dig, it has been looking more and more like enemies are trying to scare her away. They certainly are doing a very good job of scaring her in this episode. Now she’s being dragged into a terrifying magician’s act.

“My Terrible Twin” is beginning to turn around – but just as she does, her remand home past begins to catch up. First, an unreformed girl from the remand home wants Lindy to help her shoplift, and then swears revenge when Lindy refuses. Then Lindy’s enemy Helen discovers her past and is going to tell the boss!

Sometimes Wee Sue had two-part or even three-part stories, and this is the final episode of one of them. So far her class’s skiing holiday abroad has been disappointing because the whole setup looks a cheat. It turns out to be a troubled business with the owner reduced to running it as a one-man-band (chef, ski instructor, DJ etc) while not having the slightest idea how to do all the roles. Does one of Sue’s famous brainstorms save the day? No, it’s more a lucky fluke (and extremely improbable one) that turns everything around.

Thursday’s legs are mysteriously paralysed after her fall. However, Thursday has no doubt that the evil Union Jack and Julie’s strange grudge against her, which caused the fall, are behind this. Then comes a turning point: Julie is now willing to explain just what her problem is with Thursday.