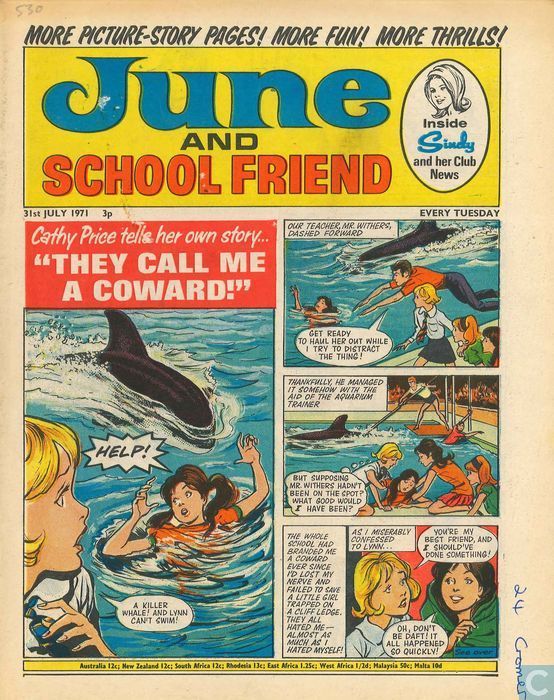 The bullying Cathy suffers at school puts her friend Lynn in danger, yet it still continues. Cathy loses her job because she is too upset over the whole affair to do it right. Her new job is proving too much for her, but she continues because her parents need the money. Everything is just piling up on our heroine!

Tinker tries to help out a sheep that has fallen down a crevice. As usual, she can’t get it right, and the sheep even takes a trip to Fairyland! At least the sheep enjoyed the trip.

It’s the final episode of “Slaves of the Sleeping Ones”. Defeating the Zurons turns out to be a matter of pressing the green button instead of the red one on their spaceship, which sends their spaceship off back into outer space. The Zurons themselves just disintegrate.

Gymnast Jinty has been secretly training Janice Stokes. Janice’s father is so opposed to her doing gymnastics that he locked her in on the day of the “Three Towns” athletic meeting. He even nailed the window shut to stop her climbing out! Jinty manages to get Janice out in time for the event. She also gives Janice’s father a good talking-to about how miserable he has made Janice by making her do things his way. Eventually Dad comes around, especially when he’s pressed to have his photo taken with his triumphant daughter.

Bessie is in a gymkhana this week. It turns out her mount is as big a food lover as she is, so she knows what to do to get him to win at every event – dangle food in front of him. What a pair!

Sindy suspects the prince her friend Francesca is set to marry is a creep, and her inquiries prove her right. The prince is a cad who squanders the family fortune and piles up debts, so it is obvious he’s out to marry Francesca for her money and squander that too. Sindy tries to show the prince up for what he is in front of Francesca, but it looks like the prince has foiled her. Fortunately the blurb for next week says that Sindy is not beaten yet.

In Lucky’s Living Doll, classmates are playing jokes with a trick spider. They get annoyed when Lucky refuses to joke someone with the spider. To keep the peace with them, Lucky pulls the joke on the teacher and cops lines.

“Orphans Alone” have a narrow escape when they get trapped at the foot of a cliff and the tide is coming in. This week’s Strange Story also has a perilous water escape, where Annie Simpson has a strange dream of a girl being kidnapped by pirates. She escapes the pirates by seizing control of the ship’s wheel and wrecking it against the Steeple Rock. The dream has Annie prepared when criminals kidnap her in the same manner, and she pulls the same stunt to escape.

Kidnapping and escaping are also the order of the day in “The Mystery of the Seal of Babylon”. The villainous Krebens has kidnapped Liza in order to force her father to reveal the whereabouts of the Seal of Babylon, a priceless relic. Liza manages an escape that would make Gymnast Jinty proud, but then a strong hand grips her. Has she been recaptured or is it something else?

In “Wild Girl of the Hills”, the mystery of Naomi’s bracelet deepens. Two gypsies know the truth, so our protagonists decide to tail them in the hope of uncovering it. 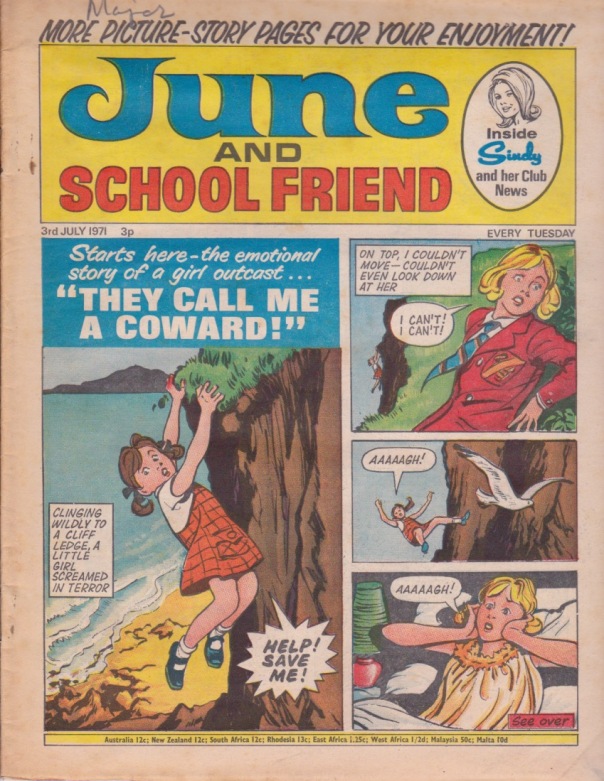 Comixminx has been putting up entries on the odd June & School Friends she has acquired, so I will do the same.

It is the first episode of “They Call Me a Coward!”, a story that has its own entry on this blog because of the parallels it shares with the Jinty story “Waves of Fear” in which the protagonist is bullied for cowardice after she fails to come to a girl’s rescue. This story will hold the cover spot for the duration of its run.

Lucky the Living Doll uses Punch and Judy props to take on a girl who uses the “Punch, punch, first day of the month and no return!” game to bully other girls. It works better than expected – the bully ends up with 500 lines.

“Speed” is Stackers’ order of the day in this week’s Bessie Bunter episode. It’s a motto that Bessie latches onto as an excuse to cause her usual mischief and even take the school governor roller-skating. Fortunately it all works out well when Bessie foils a car thief with her antics.

The Sleeping Ones in “Slaves of the Sleeping Ones” are now revealed to be aliens called Zurons. The Zurons want their slaves to dig something up for them. But Pat, our protagonist, is detected before she can find out what, and now the slaves are out to kill her!

Tinker tries to save a puppy from the doghouse when it chews up a man’s boot. Of course things don’t smoothly with her mixed-up magic, but at least it does help the puppy get away with it. Meanwhile, Sindy & Co are trying to help another dog, which has gone missing. They think they have spotted him at the circus, but it looks like a dead end.

Gymnast Jinty is trying to organise an aqua-show. Nothing has gone right so far, but can everything come together in the final episode this week?

“Orphans Alone” were all set to be adopted by the kindly Mr Maple – but then the workhouse authorities turn up, all ready to drag them back. So the orphans are on the run again. They end up in London with the aid of a barge woman and spot a vacancy. How will it go next week?

Naomi in “Wild Girl of the Hills” is not so lucky. The authorities have put her into an institution and Jean is trying to get her out. 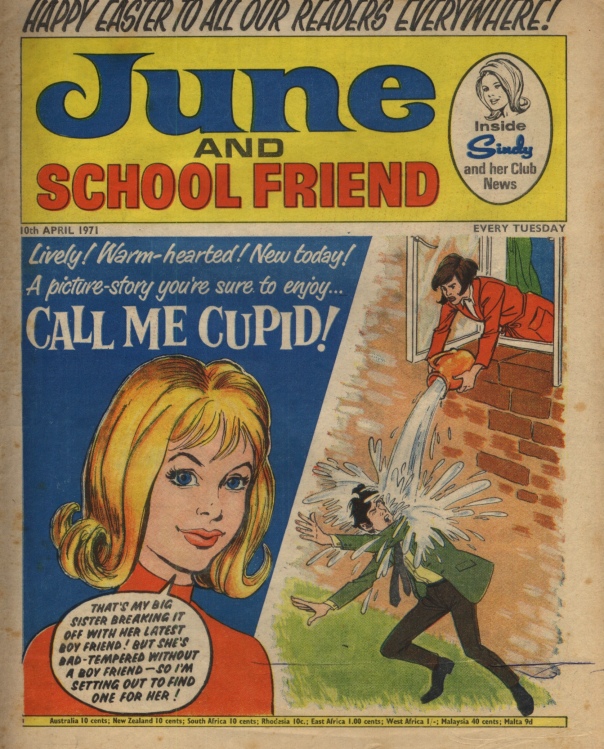 Some months ago I bought three copies of June and School Friend, slightly on a whim. They are very readable, and also interesting for the light they shed on how IPC girls comics developed over the years. There are a lot of different comics stories included – 10 in total – but these are shorter than in Jinty or the like, as they are pretty much all only 2 pages long each. That leaves more room for text items, including a three page serialised prose story, which is something that never happened in Jinty and only rarely in Tammy. I will write detailed posts on all three of them, as we do for Jinty issues, but I know fewer of the artists to be able to credit their work.

“Oh, Tinker!” looks rather like a story from a nursery-title: drawn by Trini Tinturé, it features a sweet little fairy who can cast up to 3 spells a day and often gets things mixed up. Of course in the end everything always works out ok.

The “Wild Girl of the Hills” is Naomi, a gypsy girl who lives alone in a cave and is friends with wild creatures. Her only friend is Jean Ross, whose father is the head game-keeper locally; the two girls are drawn together by their love of animals. This is a theme that occurs in other stories; Freixas’ lovely art makes it worth a look.

“Gymnast Jinty” was occasionally seen in as a reprint in an annual; it’s interesting to see this story, which I assume may have lead to the idea behind naming Jinty itself. Jinty Lewis is a popular young gym mistress at Sandbury School; she has to deal with emotional troubles from her pupil Gail.

Bessie Bunter is always a fun strip, if very silly indeed, and of course old-fashioned. Bessie does some shopping and scarfs as many free samples as she can – but what with one thing and another still ends up as the hero of the day when she inadvertently catches a shoplifter.

“Pony Trek Penny” is credited to Linda Blake, who is also credited with a text story printed in the 1975 Jinty annual. I suspect that means either that the story in the annual is a June &SF reprint, or that Mavis Miller kept Ms Blake on the creative books during the initial while that Jinty was getting established. She is not a name that seems to appear in subsequent pages of Jinty though.

“Call Me Cupid!” starts this week – a humorous story about a girl whose older sister breaks up with her fiancé when he fails to turn up to the church in time – he got his dates mixed up! Cue match-making from the younger sister, to stop her older sister from moaning so much.

There is a comic with a difference in the middle of the  issue – ‘by arrangement with the manufacturers of Pedigree Dolls’, it features Sindy and her friends. Here it is, partly so you can enjoy the lovely Phil Townsend art. 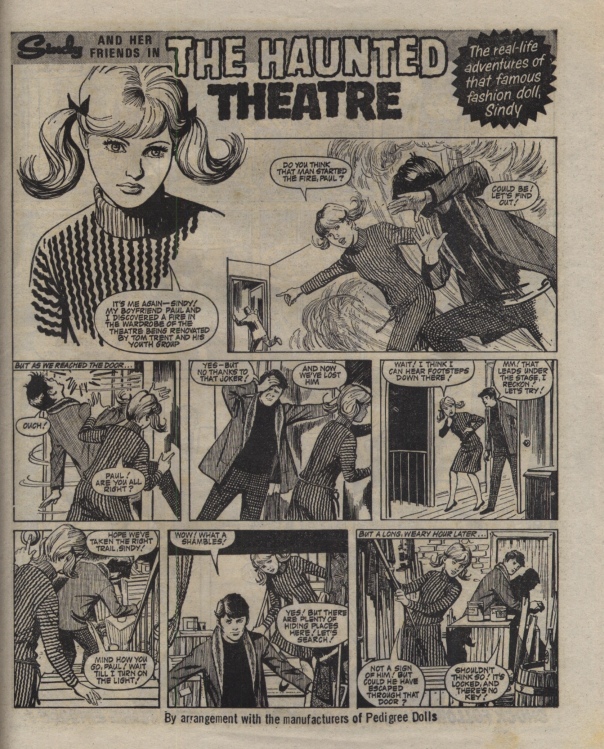 There is a two-page episode of “Lucky’s Living Doll” which lets us enjoy Robert MacGillivray’s art, but then we are very well off for his art in this issue, as the Strange Story also is drawn by him. The Strange Story is 3 pages long – the only comics story in the issue which is as long as that. A girl borrows a tennis racket from an old champion and it seems to encourage her to heights of dedication and ruthlessness, which starts to make her unhappy. And MacGillivray also draws “The Greys Fight Back!” about a family rallying round their father, who is in a wheelchair following an accident and is depressed about it. Normally this sort of role would be fulfilled by a girl protagonist so this is a different twist. It has a humorous angle rather than dealing strongly with negative emotions like anger or despair.

In the letters page we see an example of a reader who is interested in the creators behind the stories: she asks “why don’t you print something about the different artists who draw the stories”. A particular favourite of hers is Trini Tinturé, who is given a name in the reply and described as “a Spanish girl… who lives in Barcelona – and has her record player going to keep her company while she’s working!” We are promised more of Trini in a later issue. I wonder if she was in a feature?

The last story of the issue is “Secret of Bell Mountain”, a thriller which ends with the brave girl protagonist being held up at gun point by the villain of the piece.